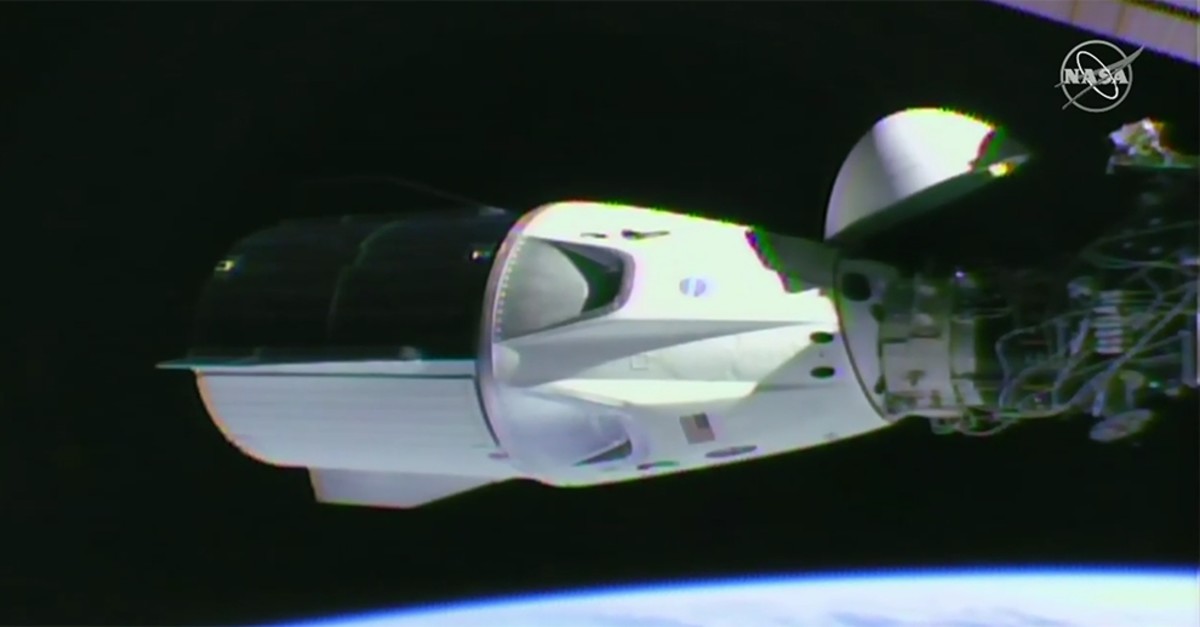 No one was aboard the Dragon capsule launched Saturday on its first test flight, only an instrumented dummy. But the three station astronauts had front-row seats as the sleek, white vessel neatly docked and became the first American-made, designed-for-crew spacecraft to pull up in eight years.

TV cameras on Dragon as well as the space station provided stunning views of one another throughout the rendezvous.

If the six-day demo goes well, SpaceX could launch two astronauts this summer under NASA's commercial crew program. Both astronauts — Doug Hurley and Bob Behnken — were at SpaceX Mission Control in Southern California, observing all the action. They rushed there from Florida after watching the Dragon rocket into orbit early Saturday from NASA's Kennedy Space Center.

"Just super excited to see it," Behnken said minutes after the link-up. "Just one more milestone that gets us ready for our flight coming up here."

While SpaceX has sent plenty of cargo Dragons to the space station, crew Dragon is a different beast. It docked autonomously under the station astronauts' watchful eyes, instead of relying on the station's robot arm for berthing. Behnken said that's the way it should work when he and Hurley are on board; they may push a button or two and will have the ability to intervene, if necessary.

As part of Sunday's shakedown, the station astronauts sent commands for the Dragon to retreat and then move forward again, before the capsule closed in for good.

SpaceX employees at company headquarters in Hawthorne, California, cheered and applauded as crew Dragon pulled up and docked at the orbiting lab, nearly 260 miles (400 kilometers) above the Pacific, north of New Zealand. They burst into applause again, several minutes later, when the Dragon's latches were tightly secured.

The station astronauts offered congratulations to SpaceX, as they got ready to open the hatches and collect the supplies stashed aboard Dragon. The capsule's lone passenger — a mannequin wearing a white SpaceX spacesuit — also was going to be welcomed aboard. The test dummy — or Smarty as SpaceX likes to call it, given all the instrumentation — is named Ripley after the lead character in the science-fiction "Alien" films.

Dragon will remain at the space station until Friday, when it undocks and aims for a splashdown in the Atlantic, a couple hundred miles off the Florida coast.

Like Ripley, the capsule is rigged with sensors to measure noise, vibration and stresses, and to monitor the life-support, propulsion and other critical systems throughout the flight.

SpaceX aims to launch Behnken and Hurley as early as July.

Next up, though, should be Boeing, NASA's other commercial crew provider. Boeing is looking to launch its Starliner capsule without a crew as early as April and with a crew possibly in August.

NASA is paying the two private companies $8 billion to build and operate the capsules for ferrying astronauts to and from the space station. Astronauts have been stuck riding Russian rockets ever since NASA's space shuttle program ended in 2011. Russian Soyuz seats go for up to $82 million apiece.