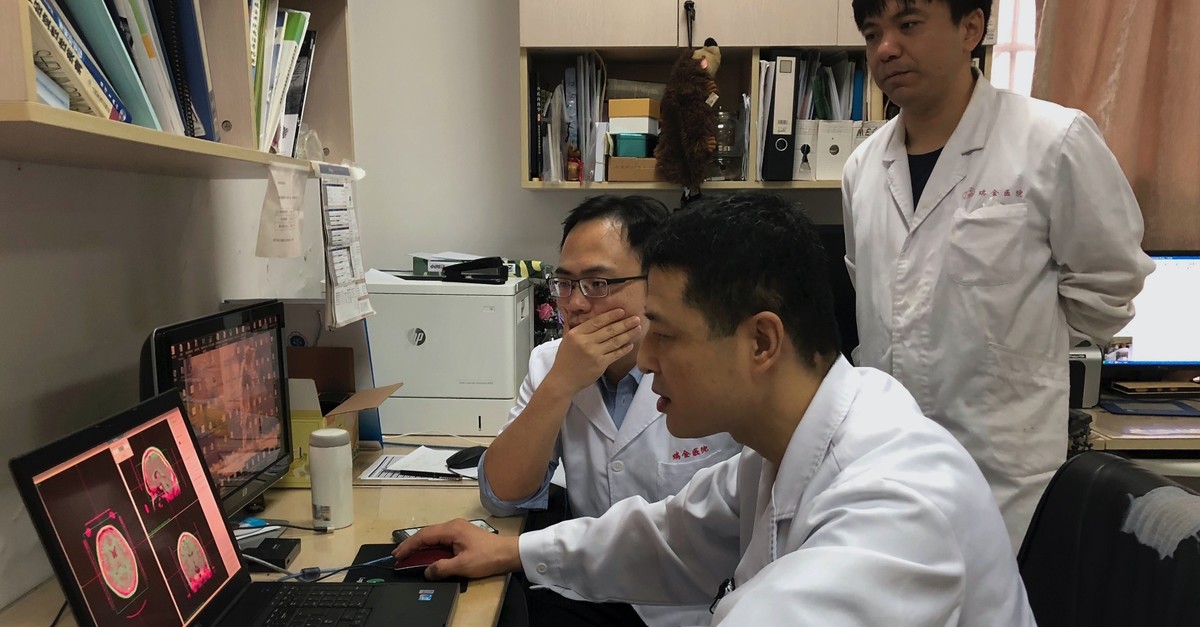 Doctors discuss a plan on how to implant a deep brain stimulation device in the brain of a methamphetamine addict named Yan on, Oct. 26, 2018 in Shanghai, China.
by Associated Press May 09, 2019 12:08 am

Patient Number One is a thin man, with a scabby face and bouncy knees. His head, shaved in preparation for surgery, is wrapped in a clean, white cloth. Years of drug use cost him his wife, his money and his self-respect, before landing him in this drab yellow room at a Shanghai hospital, facing the surgeon who in 72 hours will drill two small holes in his skull and feed electrodes deep into his brain. Patient Number One insisted that only his surname, Yan, be published; he fears losing his job if he is identified.

The hope is that technology will extinguish his addiction, quite literally, with the flip of a switch.

The treatment - deep brain stimulation or DBS has long been used for movement disorders like Parkinson's. Now, the first clinical trial of DBS for methamphetamine addiction is being conducted at Shanghai's Ruijin Hospital, along with parallel trials for opioid addicts. And this troubled man is the very first patient.

The surgery involves implanting a device that acts as a kind of pacemaker for the brain, electrically stimulating targeted areas. While Western attempts to push forward with human trials of DBS for addiction have foundered, China is emerging as a hub for this research. There are eight registered DBS clinical trials for drug addiction being conducted in the world, according to a U.S. National Institutes of Health (NIH) database. Six are in China.

"You can rest assured for the safety of this operation," Yan's surgeon, Dr. Li Dianyou, told him. "It is no problem. When it comes to effectiveness, you are not the first one, nor the last one. You can take it easy because we have done this a lot."

In fact, there are risks. There is a small chance Yan could die of a brain hemorrhage. He could emerge with changes to his personality, seizures, or an infection. And in the end, he may go right back on drugs.

Some critics believe this surgery should not be allowed. They argue that such human experiments are premature, and will not address the complex biological, social and psychological factors that drive addiction.

Scientists don't fully understand how DBS works and there is still debate about where electrodes should be placed to treat addiction. There is also skepticism in the global scientific community about the general quality and ethical rigor particularly around issues like informed consent of clinical trials done in China.

"The lack of scientific clarity, the important but strict regulatory regime, along with the high cost and risk of surgery make clinical trials of DBS for addiction in the U.S. difficult at the present time," said Dr. Emad Eskandar, the chairman of neurological surgery at Albert Einstein College of Medicine in New York.

China's studies have offered mixed results. Sun and his colleagues have published one case study, describing a heroin addict who fatally overdosed three months after getting DBS. But a separate pilot study published in January by doctors at a military hospital in Xi'an showed that five of eight heroin addicts stayed off drugs for two years after DBS surgery.

The next day after the surgery, Yan sat across from Dr. Li, who used a tablet computer to remotely adjust the machine thrumming inside Yan's head. He was in high spirits. "This machine is pretty magical. He adjusts it to make you happy and you're happy, to make you nervous and you're nervous," Yan said. "It controls your happiness, anger, grief and joy."