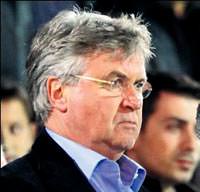 Coaching the Turkish national football team is not a bed of roses or something for the fainthearted. But this new Dutch coach Guus Hiddink belatedly understood.


We had gone out of our way to warn Mr. Hiddink, even before he officially took over in August, that the team his predecessor Fatih Terim left behind was the epitome of failure as it missed out on the 2010 World Cup in South Africa. Therefore, continuing with that failed squad would be suicidal.

"Zararın neresinden dönersen kardır," the Turks say, meaning it is never too late to mend. And so it was a huge relief for Turkish fans on Tuesday when Hiddink told NTVspor that he is seriously contemplating introducing new young players into the Turkish national team, even though he mentioned no names.

"Young players will be brought in to reinvigorate the team," the Dutch coach said. "I am aware I have to field more young players. I am going to watch several players very closely between now and March and then decide on which youngsters I will bring into the fold," he also told the TV station.

"The longest way round is the shortest way home," they say. So what Hiddink is planning to do now, he should have started doing when he took over in August. Turkish football lovers wanted the new coach to inject fresh blood into the team because that's why he was hired in the first place, not to continue with Terim's unfancied players.

No shortcut to success

The Dutchman was expected to scout for new Turkish talent at home and abroad, add a few old-timers and form a team capable of leading Turkey to the Euro 2012 and 2014 World Cup finals. Maybe, just maybe, Hiddink thought there was a shortcut to success. But there is no such thing, especially in the beautiful game.

As a matter of fact, there was no way Hiddink could succeed with the present team. Furthermore, Turkish fans are fed up seeing the same underachieving players representing the country. Servet Çetin, Hakan Kadir Balta, Mehmet Aurelio, Tuncay Şanlı, Kazım Kazım and maybe error-prone keeper Volkan Demirel may have outlived their usefulness and should therefore be relegated to the sidelines.

Hiddink, without doubt, got the wake-up after Turkey was mercilessly thrashed 3-0 by Germany in their Euro 2012 Group A qualifier in Berlin on Oct. 8. There and then he realized that "you can run, but you can't hide."

"It is natural to be criticized after every defeat," Hiddink said, alluding to the heavy bombardment he suffered after the Berlin debacle. "Of course I listen to constructive criticisms and shut my ears to negative things," he added.

There is no justice in football, where the result is all that matters. So as long as the Turkish national team obtains the desired results and qualifies for both the Euro 2012 and 2014 World Cup finals, Hiddink can rest assured that he will not be criticized. On the contrary, he will be placed on a pedestal and declared a national hero.

But if the team fails, then the Dutchman will be made to understand that this is a country with 75 million coaches.
CIHAN
Last Update: Oct 27, 2010 1:35 pm
RELATED TOPICS