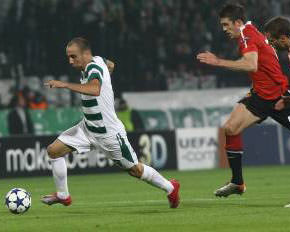 Manchester United beat Turkey's Bursaspor 3-0 in Group C of the Champions League on Tuesday to move even closer to a place in the knockout stage.

BURSA, Turkey — (AP) Darren Fletcher, Gabriel Obertan and youngster Bebe, with a shot which deflected in off Ali Tandogan, all scored in the second half to give United a comfortable win over last-place Bursaspor. It tops the group with 10 points, three ahead of Valencia.

Bursaspor, making its debut in the competition, remains without a point from four matches and cannot now qualify for the knockout stage.

United suffered a setback with an early knee injury to Nani, but used its controlled passing game in midfield to build up a series of attacks. Manager Alex Ferguson gave a rare start to Obertan, supporting main striker Dimitar Berbatov and the combination came close to breaking the deadlock in the 10th minute. Obertan provided the flick and Berbatov supplied the volley — only for the Bulgarian's effort to be saved by Bursa keeper Dimitar Ivankov.

Ertugrul Saglam's team looked to hit United on the counter attack with the pace of Gokcek Vederson, Volkan Sen and Turgay Bahadir working the wings.

Bursa's best chance of the first half came when Sercan put Bahadir through for a one-on-one with keeper Edwin Van der Sar, but the winger was unable to lob the ball over the Dutchman.

Shortly after, things looked to be turning in Bursa's favour as Nani was replaced by Park Ji-sung after picking up a knee injury. However, neither side was able to break the deadlock.

United started the second half looking more committed and their efforts paid off in the 48th minute, when Michael Carrick found Fletcher unmarked on the right side of the box and his low shot eased past Ivankov on its way to the back of net.

Bursa almost mirrored United's strike in the 52nd minute. However, Frederico Insua was unable to get a clear shot on goal after being put through by Sen and the Argentine's effort was comfortably held by Van der Sar.

As Bursa surged forward in numbers, United looked more dangerous on the counter attack. On the 73rd minute Obertan caught Tandogan wrong footed after receiving a pass from Park and the Frenchman unleashed a thunderous strike to make it 2-0.

Just moments later, a clever through ball from Paul Scholes put Bebe through. The Portuguese youngster got to the ball just in time and his low shot got a slight touch from defender Tandogan before landing in the bottom corner of the net.

"We were successful with counter attacks, we got into positions and won corners. We did everything in the first half that could have been expected," Saglam said.

"We improved from the previous games, we were finally able to get into multiple goal positions. There is of course a huge difference in player quality and football mentality between them and us," he said.

Bursa will travel to the Mestella stadium next in search of its first goals and points against Valencia on Nov. 24, while United will hope for a speedy recovery for playmaker Nani ahead of their trip to Ibrox to face Rangers.
Last Update: Nov 03, 2010 12:28 pm
RELATED TOPICS