More than a game… 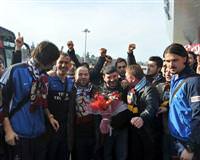 Tonight’s Ziraat Turkey Cup game between Beşiktaş and Trabzonspor , played in the shadow of the league race, will be bringing Beşiktaş’ new stars out in the forefront, while Trabzonspor’s mind may be stuck on this weekend’s difficult derby game again Fenerbahçe in Kadikoy. The league leaders are hoping to start off their Istanbul stint on a good foot and to refresh their confidence after this weekend’s draw.

Beşiktaş and Trabzonspor face off tonight at 20:00 at the Fi Yapi İnönü Stadium for Group B of the Turkey Cup. Tonight's match is critical in order to pass through the group stage of the Ziraat Turkey Cup. However, for both teams tonight's match constitutes more than just a game. ..
With a series of new stars, Beşiktaş aims to bring Turkey to storm, while Trabzonspor has intentions of putting an end to 27 years of longing for a championship and therefore will be trying to prove something tonight.
Meanwhile, after the Bucaspor win with five goals scored, Beşiktaş's Technical Director Schuster stated; "We'll just have to see what we can do against the league leaders in the Cup game."
GÜNEŞ'S MIND IS ON FENERBAHÇE
With dates to play Istanbul's biggest three teams in their respective home stadiums, Trabzonspor 's Technical Director Şenol Güneş is concerned about losing 'altitude'. Coupled by his statement, "The Fenerbahçe game is more important to us," expectations have aroused that certain stars on the team may be allowed to rest tonight.