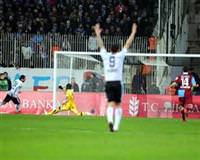 In last night’s Ziraat Turkey Cup, hosts Beşiktaş put on a show against Trabzonspor, securing their spot in the next round with a 2-1 win. Beşiktaş’s goals scored by Almeida and Quaresma overpowered the league leader’s single score by Alanzinho.

Beşiktaş was in the mood last night and Trabzonspor, the current league leaders, had their sights set on this weekend's game against Fenerbahçe. News had already surfaced that Trabzonspor's technical director would be coming out with a team consisting of a majority of substitute players. It was already made quite obvious that Trabzonspor is heading full force for the league championship and therefore was more concerned about Sunday's Fenerbahçe game. Beşiktaş's technical director Schuster was of a different mindset. He didn't veer from the starting lineup he played against Bucaspor and garnered a 5-1 win. Last night, Beşiktaş made their mark with both goals scored by Quaresma and Simao in the first half of the game, while Trabzonspor came back with a score by Alanzinho in the second.

Beşiktaş started off early with Simao who brought the ball all the way in from the left wing in to score in the 10th minute. In the 26th minute, Simao's pass to Almeida almost turned into a goal, except that Almeida's shot went out, gliding past the goalpost. In the 29th minute, Almeida headed the ball to Quaresma, who made an amazing strike from 25 meters' distance to bring the score up to 2-0.

The storm arose in the second half of last night's game. Trabzonspor decided to show up and in just the 46th minute a pass from Brozek to Alanzinho turned into Trabzonspor's sole goal; 2-1. However, they did not stop trying. In the 49th minute, Yattara's center pass was headed by Pawel Brozak yet got tripped up by the goal post. In the 57th minute, it was Beşiktaş's turn to be blocked by the goalpost, this time from a shot by Almeida. In the 61st minute, despite being face on, Alanzinho was unable to score. In the 90th minute, Fernandes sent a fuse which was saved by Onur. When the final whistle blew it was clear that after last night's game Beşiktaş would be moving on and Trabzonspor would be saying goodbye to the cup. As Trabzonspor finished off the B Group in third place with the loss against Beşiktaş, last night marked their final Turkey cup game this season.