Taurasi to return till end of season 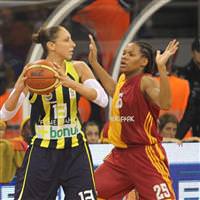 Prior to the doping scandal, Taurasi had carried Fenerbahçe’s female basketball team to the top. The team was continuing on its European path undefeated… However after losing the USA star, Fenerbahçe also lost their spot at the league peak and had to say goodbye to Europe.

Fenerbahçe released an announcement on their website yesterday stating that they were still insistent on renewing the transfer with Taurasi and as a result of negotiations with Turkey's Basketball Federation they will be able to sign a contract with the famous star for the remainder of the normal season.
In December, Diana Taurasi was suspended for a positive stimulant test. In February, her doping suspension was lifted after a Turkish lab admitted it had erred in the results.