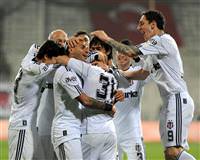 After a disappointing league presence this season, Beşiktaş has now made things easier for themselves on their way to the Turkey Ziraat Cup finals with last night’s 3-0 win against Gaziantepspor. Beşiktaş’s fans were restricted from the stadium; however the team’s Portuguese players went ahead and secured the win. Quaresma put on a show, while Simao scored two goals and Almeida the third.

Beşiktaş struggled for 63 minutes, while guests Gaziantepspor secured six to seven positions. However, Rüştü's expertise resulted in series after series of successful saves. Then Beşiktaş came in to finish off the job. The final in the Turkey Ziraat Cup is no longer a distant aspiration for last night's hosts, in fact now it is very, very close. Beşiktaş had to keep going for the Turkey Cup to retain any aspirations of playing in European Leagues, and they did so, maybe without the support of their fans, instead they managed to walk alone. For a number of plays Rüştü was the most valuable player. In other significant plays, there was also Simao, Quaresma and Necip…
The positions found in the first half were on behalf of the visiting team. In the 17th minute Cenk sent a strike he received while his back was turned towards the goalpost and struck straight in the bottom corner of the goalpost, which Rüştü saved with brilliant reflexes, sending the ball to a corner shot. In the 21st minute, Beşiktaş's goalkeeper was successful once again faced with a strike from Murat Ceylan… In the 37th minute, Wagner entered into the penalty field from the left, Cenk hit a header, which was once again saved by Rüştü. Beşiktaş's disjointed game throughout the night was also of notice. Guti's passes were inconsistent, Almeida was lost, Rüştü made wonderful saves, while Quaresma, Simao and Guti's constant changing of positions in the middle field were amongst the scenes depicted on the field last night. Then there were the painful plays on the pitch that the players did not refrain from protesting.
Gaziantepspor started off the second half of the game well… In the 50th minute, Olcan hit a shot outside of the penalty field. Rüştü's save sent the ball to corner shot. In the 55th minute an unbelievable goal opportunity was missed. Olcan's ball sent in to the penalty field from the left went to Ismael Sosa, whom instead of sending the ball into an empty goalpost, let the ball pass straight between his legs. In the 57th minute, Guti exited the game. Fernandes came in. In the 60th minute, once again Rüştü managed to say no to a shot from Hürriyet. In the 63rd minute Hürriyet brought Quaresma down. Simao struck the free kick ball beautifully and Karcemarskas' efforts were not enough: 1-0. This goal not only managed to break Gaziantepspor's morale but also their resistance. In the 75th minute, Beşiktaş brought the score difference up to two. Almeida scored a header off of a pass by Fernandes: 2-0. In the 87th minute, a fuse shot from outside of the penalty field by Ernst was blocked by Karcemarskas. Simao recovered the ball left on its own, and sent it straight to the goalpost bringing the score up to 3-0 and thereby securing Beşiktaş's spot in the finals.