"No chance" of Hiddink joining Chelsea for now 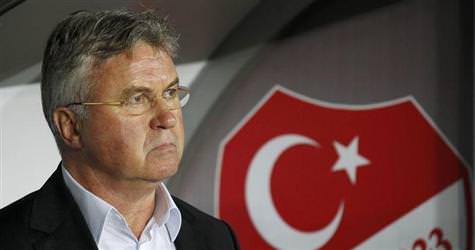 Guus Hiddink’s agent has ruled out any prospect of the Dutchman becoming Chelsea’s coach for the start of the new season in August, if the London club decide to sack Carlo Ancelotti.

Cees van Nieuwenhuizen told Reuters on Friday that Hiddink, who coached Chelsea for a brief spell in 2009, would remain in charge of Turkey until at least the end of the Euro 2012 qualifying campaign in November.

"No chance," Van Nieuwenhuizen said in a telephone interview when asked if there was a possibility of Hiddink joining the Stamford Bridge team for the start of the 2011-12 season.

"Guus has always honoured his contracts and when he signed (with the Turkish FA) he guaranteed them he would not leave until the deal had expired."

Hiddink agreed a four-year contract, with the final two years optional, in February 2010.

Earlier on Friday Ancelotti said it would be "no problem" if he was sacked at the end of this season, a campaign which looks like being trophy-less for Chelsea.

"I don't know what my future is," the Italian told a news conference. "At the end of the season I think the club can decide if I continue here or (if) they want to change."

Turkey, who reached the Euro 2008 semi-finals, have struggled to qualify for the 2012 tournament following two successive defeats including a 1-0 upset by Azerbaijan.

They revived their hopes when last month's 2-0 win over Austria put them third in Group A, six points adrift of leaders Germany and one behind Belgium.

"There's still a chance of them finishing second and qualifying for the playoff," said Van Nieuwenhuizen.

"Even if they lose their next qualifier (on June 3) against Belgium they're still mathematically not out of it, meaning Guus won't be free until mid or late November at the earliest."

Hiddink has a good relationship with Chelsea's billionaire Russian owner Roman Abramovich and the 64-year-old coach has said several times he could take a sporting director role at Stamford Bridge when his coaching career is over.

Van Nieuwenhuizen also ruled out the prospect of Hiddink combining the Turkey and Chelsea jobs, just like he did two years ago when he led the Londoners to FA Cup final glory at the same time as working as Russia coach.

As for the Dutchman's future beyond this year his agent said: "Let's wait and see".