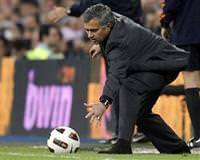 Jose Mourinho must resolve a tactical dilemma when he attempts to land his first piece of silverware as Real Madrid coach in Wednesday's King's Cup final against Barcelona at Valencia's Mestalla stadium.

The charismatic Portuguese coach went into Saturday's 1-1 La Liga draw against the same opposition with an ultra-cautious approach that was not to the liking of former Real great Alfredo Di Stefano.

The club's honorary president described Barcelona as a lion playing with a mouse and called for a different strategy in the King's Cup, the second game in a four-match sequence of 'Clasico' confrontations to be played over 18 days.

"Saturday's game should give pause for thought on how to face up to the next because trying to play Barcelona on the break clearly isn't the most adequate," the 84-year-old Di Stefano wrote in the sports daily Marca.

"Barca treat the ball with respect, adoration, they almost pamper it. To watch this team in action is a delight."

Mourinho's side sat back at the Bernabeu on Saturday in the hope of stealing a goal on the break, frustrating Barca enough to prevent his opposite number Pep Guardiola making it six wins from six games against Real.

It also avoided a re-run of the 5-0 thrashing Real suffered at the Nou Camp back in November.

Coming back from 1-0 down with 10 men had home fans proclaiming a "draw that tasted like a victory" even though it effectively ended their chances of catching the leaders who maintained an eight-point advantage with six games left.

Mourinho's decision to convert Pepe from centre-back into muscular midfield destroyer with two other holding midfielders was his major tactical change on Saturday and the player he sacrificed was Mesut Ozil.

The stylish German, however, turned the game with his darting runs and clever passes when he came on as a late substitute and Mourinho is likely to include him on Wednesday, perhaps at the expense of a recognised number nine.

Defender Raul Albiol is suspended after his red card at the weekend which may mean Sergio Ramos moves across into the centre alongside Ricardo Carvalho.

With the league now a long shot Real's remaining options for their first silverware since 2008 lie in the King's Cup, a trophy they last lifted in 1993, and the Champions League where they meet Barca in a semi-final first leg next week.

Guardiola, who won the King's Cup in a treble-winning season with Barca in 2009, has another treble in his sights and is unlikely to change his tried and tested formula.

Argentine midfielder Javier Mascherano is back from suspension and could help cover if central defender Carles Puyol does not shrug off a thigh strain.

"I'll go for sure but I don't know if I'll be able to play," shaggy-haired captain Puyol told reporters.

When asked whether Barca would consider any changes after being frustrated on Saturday, he replied: "Everyone plays the way they believe and using their best weapons.

"We have a philosophy and a way of playing and we will always respect it."

For all their domination of possession, which was around 72 percent on Saturday, Barca were unable to finish off their rivals.

Former Barca great Johan Cruyff said that should act as a warning to the team especially against a "titles specialist" like Mourinho.

"Guardiola's men have been advised," he wrote in the daily El Periodico. "Even if they remain loyal to their style they will have to improve."