No red faces at Red Bull on Turkish return 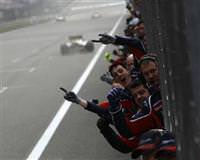 Mark Webber and Formula One world champion Sebastian Vettel will make sure there are no red faces at Red Bull in Turkey this weekend after learning an embarrassing lesson last year.

What could have been a dominant one-two finish ended in rage and recrimination after the two team mates collided while fighting for the lead, gifting McLaren maximum points instead.

Red Bull have won the Formula One driver and constructor championships since then and return to Istanbul leading both again.

"Obviously last year what happened, happened," team principal Christian Horner told Reuters ahead of the fourth round of the campaign and first of the European season, even if the circuit is on the Asian side of the city.

"We'll be going there to do our very best and it's a circuit that both drivers have gone well at previously. As we saw in China, tyres and strategy play a key role and it will probably be the same again this weekend."

Four of the six races held at the anti-clockwise Istanbul Park have been won from pole position, with the Red Bull drivers the only ones not to have converted the top slot on the grid into victory.

Vettel was on pole in 2009, but the German could not match the pace of Jenson Button's Brawn, while Australian Webber was fastest in qualifying last year only to end up third on race day.

Vettel has been on pole for the past four races, two of them at the end of last year, and will again line up as a hot favourite for a race that risks disappearing from the calendar due to poor attendances and a payment dispute.

The 23-year-old won in Australia and Malaysia and was second in China after a strategic error by the team.

Red Bull still have the fastest car but their KERS (kinetic energy recovery system) proved troublesome in the opening 'flyaway' races -- problems Horner was confident had been addressed.

"Our main focus of attention has been to try to get on top of the KERS issues," he said.

"It's a relatively new technology to us but we are working hard to understand and get on top of it. We've got some updates coming which hopefully will address some of the niggly issues that we've had in the early races.

"We've made progress at all three races. From it not being on the car in Melbourne to making its racing debut in Malaysia and then getting even more mileage out of the system in China," he added.

"So with every event we are learning more and more and I'm confident that we will have hopefully made a good step forward with the system again this weekend."

McLaren's Lewis Hamilton won in Turkey last year and, at a fast circuit where KERS will make a real difference, has the momentum after beating the two Red Bull drivers to the top of the podium in China last month.

"For this race, I think we'll be seeing drivers working quite hard to look after their tyres throughout the race, particularly in Turn Eight, which is fast and bumpy," the 2008 champion said in a team preview.

"It's one of the most demanding corners for tyres anywhere on the calendar.

"There's every reason to believe that the run of interesting and exciting races will continue," he added.

Horner expected Ferrari, who have yet to finish higher than fourth this year, and Michael Schumacher's improving Mercedes to be in the mix as well.