Hiddink says he can combine club and country 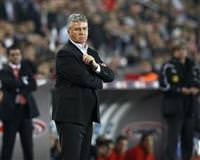 Turkey coach Guus Hiddink heightened speculation of a possible return to Premier League Chelsea when he said he would prefer the tempo of a club role to a national coaching job in an interview published Tuesday.

Dutchman Hiddink, who had a successful five-month stint in charge of Chelsea two years ago, is one of the favourites to take over from Italian Carlo Ancelotti who was sacked this month.

Hiddink, whose Turkey side face Belgium in a crucial Euro 2012 qualifier Friday, said he felt energetic at the age of 65 and had been very happy in the past when he coached national and club sides at the same time.

"I feel energetic, so a club role is more preferable. And that's what I like, working every day. I feel I need to do more," he said in an interview.

"I've trained Australia and PSV at the same time, as well as Russia and Chelsea, and I was very happy. We'll see what happens with Turkey."

Turkey are third in Group A, one point behind Belgium and six points behind leaders Germany, and a loss Friday would jeopardise their chances of competing at Euro 2012. Turkish media reports have said Hiddink could be sacked if the team fail to qualify for the finals.

Hiddink said he had not received any official offers from any club sides.

"There is no official offer yet, but I can't guarantee anything. I haven't told the chairman (Turkish Football Federation chairman Mahmut Ozgener) what I thought yet. But he's an intelligent man. I am sure he follows the world media," Hiddink said.

He said his Turkey contract was valid for another year.

"I never told anybody I was going to continue working here. The team is focussed on me, I would affect the team negatively if I answered the speculation," he said.