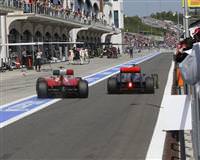 The Turkish Grand Prix retained its place, subject to confirmation, on a record 21 race 2012 Formula One calendar published on Friday.

The race at the Istanbul circuit had been called into question when local organisers said it faced the axe because of a disagreement over payments to commercial supremo Bernie Ecclestone.

The calendar issued by the governing International Automobile Federation (FIA) after a meeting of its world motor sport council in Barcelona listed Turkey as the sixth round of the season on May 6.

Bahrain, whose season-opening race was postponed this season but reinstated on Friday to an Oct. 30 slot on a 20-race calendar, will again be the first round of the 2012 championship on March 11.

But in a departure from this season, Korea will move to April 22 from its current October slot.

The United States returns with a new race in Austin, Texas, on June 17 and the weekend after the Canadian Grand Prix in Montreal.

The season will end with a string of five long-haul races for the Europe-based teams with Singapore on Sept. 30, followed by Japan, India, Abu Dhabi and Brazil as the finale on Nov. 25.