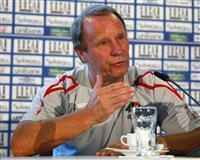 Azerbaijan football coach Berti Vogts was attacked by three men during a news conference in Baku on Sunday ahead of Tuesday's Euro 2012 qualifier against Germany but said he would still sit on the bench.

The German, under fire in Azeri media following his team's disappointing run, told German reporters in Baku that he had filed a report with police and would "discuss his next steps with my lawyers."

He said three men, who were not journalists, attacked him before being stopped by security guards in the room. Vogts said he was unhurt.

Vogts, who coached Germany to the 1996 European title, said he would still coach the team on Tuesday despite the incident.

"I would have long ago left if it were not for my friendship with the federation president," he told Germany's SID agency. "I have experienced many things but nothing like that. I do not have the words to describe this."

Pressure on Vogts, who won the 1974 World Cup as a player, has been mounting since his team's 2-1 defeat to bottom-placed Kazakhstan on Friday that left them with three points from five matches in qualifying Group A.

"This is a no-go. To attack a coach is unacceptable whatever the outcome of a match. I am surprised to hear the news," Germany coach Joachim Loew told reporters in Vienna as the team prepared to leave for Azerbaijan following their 2-1 win against Austria on Friday.

"Azerbaijan may have lost against Kazakhstan but they have, for example, won a crucial game against Turkey and that shows their development that is strongly linked to Berti Vogts. So this really is a surprise."

Germany lead the group with 18 points.