Lions never give up! 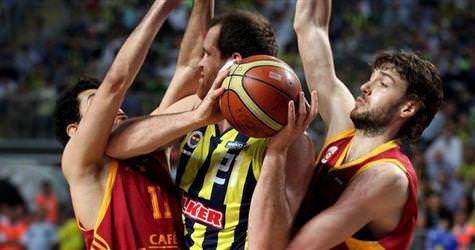 Fenerbahce’s Ülker went out to play a game last night they thought would end with championship celebrations on their home court, however despite being ahead by four with just one a half minutes left, they went on to lose to final rivals. With Galatasaray Café Crown’s smart basketball, and Shipp’s last minute basket, they managed to take the victory with a 19-9 majority in assists.

Last night Fenerbahçe Ülker went out to win, needing just one game to claim the Beko Basketball League Championship title, however in the final minutes Galatasaray Café Crown turned it around to secure a 72-71 win in the fifth game of the play-off series.
With Ömer's illness and Marko Tomas injured, there might be reason enough for Fenerbahce's hitches in offense. Throughout the game however Coach Spahija failed to find a solution to their rival's field defense not the duo Tutku-Andric plays. The game, which was played in the shadow of stress and exhaustion was marked by a fast offensive and hurried Fenerbahçe players who went on to make just nine assists, four of which were in the first period alone, which is demonstrative of just how much the team lacked in offense.
However, Fenerbahçe had the lead at 71-67 points just a minute and half before the end of the game. They weren't able to keep their advantage however, and with just 48 seconds left with the score was at 71-70 Shipp's two points sealed the deal for Galatasaray. The funny thing is, the winning shot was the first for the player in the second half of the game. The stars of last night's play-off were Tutku, Andric and Shipp

GALATASARAY GAINS MORALE
No one expected a sixth game would be played in the finals, but this Friday Galatasaray Cafe Crown hosts Fenerbahçe Ülker at the Abdi İpekçi Sports Center. Fenerbahçe Ülker maintains a 3-2 lead and needs a single win to guarantee the championship title. However, in terms of morale, Galatasaray now has the advantage. Should the series go on to a seventh game at Sinan Erdem, then all bets are off. Galatasaray proved last night that anything could happen.
Tickets are now on sale at 'Biletix' for the sixth game in the Beko Basketball League Championship play-off final series. Tickets are seven or 12 lira and the game takes place Friday, June 17th at 20:00 at the Abdi İpekçi Sports Center.