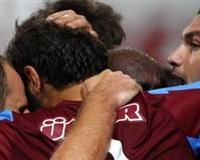 Barcelona and AC Milan meet in a heavyweight Champions League opener and the other match in their group pits a team whose name is usually associated with beer against a side owing its existence to tractors.

The opening week of this season's group stage features all the usual European soccer powerhouses with several mouth-watering clashes alongside the start of Barcelona's defence of their trophy against seven-times champions Milan on Tuesday.

Bayern Munich, knowing they cannot afford any slip-ups if they want to take part when their Allianz Arena hosts the final, have a tricky visit to Villarreal and four-times European champions Ajax Amsterdam, hoping to reclaim their place among Europe's elite, host Olympique Lyon.

Those matches are likely to capture the attention of the public and media yet old romantics such as UEFA president Michel Platini are more likely to enjoy the meeting of Czech champions Viktoria Plzen and their Belarus counterparts BATE Borisov in Group H.

Plzen's surprise qualification will be a tonic to Platini who has tried to open up the Champions League to smaller clubs with fewer resources and wants teams to have local identity rather than foreign imports.

Far from buying their way to success, Plzen have only four foreign players in their squad, all from neighbouring Slovakia, and stunned Czech football last season by winning their first league title with a team made up of promising youngsters and assorted journeymen.

"Some of our players weren't good enough for other sides, but they showed how well they can play here," said coach Pavel Vrba who took over three years ago.

The team revolves around 36-year-old playmaker Pavel Horwarth, who joined three years ago after he was no longer wanted by Sparta Prague and was voted Czech player of the year last season.

"The past two seasons with Plzen have been the best of my life. Winning the league with Plzen is my greatest achievement," said the former Sporting Lisbon and Galatasaray player.

The city is where Pilsner beer was developed in the 19th century although Vikotria will have to stage matches in Prague, around 90 kilometres away, as their own stadium is still not up to Champions League standards.

Seven-times Belarusian champions BATE are making their second Champions League appearance. The initials in their name stand for Borisov Automobile and Tractor Electronics.

Founded as a factory side in 1973, they started in the Soviet-era Belarus second division and have become a major force locally since the mid 1990s. Like their opponents, they rely largely on home-bred players with only three foreigners -- two Serbs and a Brazilian -- in the squad.

Both teams were helped by the qualifying system introduced under Platini in which five group stage places are reserved for champion teams from lower-ranked nations, and the same goes for two of the other debutants Trabzonspor and Romanian champions Otelul Galati.

Otelul visit FC Basel in Group C on Wednesday, a match which plays second fiddle to the Benfica-Manchester United meeting at the Stadium of Light.

Twice European champions Benfica, who qualified as Portuguese runners-up, are the complete opposite to Plzen, having started both legs of their playoff tie with eight South Americans and no home-based players in their side.

Trabzonspor, who initially qualified as Turkish runners-up and were knocked out of the qualifiers by Benfica, were given a second bite of the cherry when champions Fenerbahce were pulled out by the Turkish FA over the country's match-fixing scandal.

Trabzonspor kick off on Wednesday in Group B against 2010 champions Inter Milan, who have been red left-faced by the discovery that new signing Diego Forlan can only play from the knockout stages onwards.

High-profile managers Arsene Wenger and Jose Mourinho will not be as heavily involved as they would like.

Wenger will have to watch Arsenal's Group F match at Dortmund on Tuesday from the stands as he serves a two-match ban imposed after he broke the conditions of a previous suspension.

Mourinho, whose Real Madrid side visit Croatia champions Dinamo Zagreb in Group D on Wednesday, will serve the second of a three-match ban imposed for his sending-off and post-match outburst following last season's notorious clash with Barcelona.

Mourinho's former club Chelsea kick off their campaign in Group E, which they are expected to win, at home to Bayer Leverkusen on Tuesday. Valencia visit rank outsiders Racing Genk of Belgium.