Fenerbahçe locked in with three points 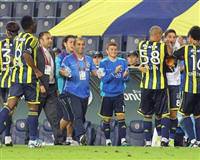 Cristian’s goal was dedicated to Club Chairman Aziz Yıldırım, who had written personal letters to Kocaman and the players from the Metris Penitentiary.

Suffering from extraordinary circumstances since July 3rd, Fenerbahçe managed to kick off the Spor Toto Super League season with a win to pick their spirits up on September 12th. The same team which, last season relentlessly refrained from allowing rivals to establish positions and closed off their own goalpost, spent the first half hour against Ordu, a newly promoted team from the Bank Asya League, with the exception of two plays in the 15th and 17th minutes by Dia and Alex respectively.
Orduspor in return found two clear positions with balls brought in by Culio to Fatih Tekke. In the 22nd minute, a left pass from Culio left Fatih face to face with an empty goalpost, however the experienced player ended up sending the ball out over the post. Five minutes later, another shot by Fatih hit Bilica, ending up out and allowing a corner shot. Fenerbahçe found their first position in the 31st minute due to a slip by Emre when receiving the ball from the goalkeeper Fornezzi. Mehmet found himself in front of the ball and sent a nice pass over to Semih. Semih, even though he had a shoot opportunity, chose to pass it on to Cristian, whose angle was more secured. The Brazilian sent the ball on to the empty goal post, thereby scoring Fenerbahce's first goal of the season. In the 40th and 42nd minutes Ordu took the stage to no avail.
WE NEED TIME...
The second half started with Ordu followed Fenerbahce's tempo. The first clear position came from Captain Alex, who sent the ball to teammate Semih, however no goal was scored. In the 63rd minute, Bienvenu came in to replace Niang, donning the Fenerbahçe uniform for the first time. Initial observations on the Cameroonian player are that he is driven and fast however not yet at Niang's level. Alex took the stage in last night's only slightly exciting match. In the end, Fenerbahçe had to drag themselves up to play in a stadium with no fans. However by acquiring three points to kick off the season, it appears they are making a good start.