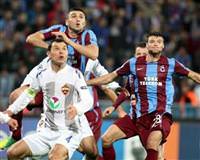 Trabzonspor were held to a 0-0 draw by CSKA Moscow in their Champions League Group B fixture on Wednesday, failing to capitalise on Seydou Doumbia’s sending off and leaving both sides with work to do to advance in the competition.

Doumbia, who scored twice in the match between the two sides in Moscow, again left his mark on the match by being sent off after receiving a second yellow card for a foul on his Ivorian compatriot Didier Zokora in the 74th minute.

The CSKA striker had been at the heart of the action, creating a couple of chances at either end of the first half.

In the second minute, a shot from Doumbia was cleared off the goalline by home defender Giray Kacar. He went close again at the end of the half, but keeper Tolga Zengin's knee kept his shot out after the forward had been clean on goal.

The result left both clubs on five points, with second-placed CSKA Moscow ahead on head-to-head and Inter Milan top with two games to go after their win over bottom side Lille.

Burak Yilmaz, Trabzonspor's top scorer in the Turkish league, was the greatest threat for the home side but was repeatedly caught offside. He engineered a chance in the 31st minute, holding off a defender and turning to fire in a shot but missed the target.

Zokora said Trabzonspor, who won at 2010 winners Inter in their opening game, had surprised many people.

"I think we have a good chance of going through. Trabzon is taking part in the competition for the first time and not many would have expected us to have five points after four games," Zokora told reporters.

"We have started to defend better and it is important that we didn't concede any goals."

With half an hour remaining, Trabzonspor brought on Alanzinho and Paulo Henrique to refresh the side's attacking options.

The change nearly yielded dividends in the 67th minute when Alanzinho made a strong run down the left and fired in a shot, which Vladimir Gabulov saved.

CSKA remained a threat after Doumbia's sending off, forcing two saves out of the home keeper.

A late attacking flurry from Trabzon in the final minutes gave the home fans hope, but a header from Ondrej Celustka rebounded off the post to frustrate the Black Sea side and enabled the visitors to hang on for a point.

Trabzonspor next host Inter on Nov. 22 when CSKA welcome Lille.