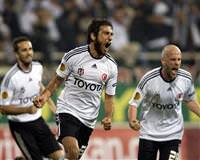 Beşiktaş played a balanced starting line-up last night. In just the 12th minute, an excellent pass by Hilbert could have but wasn't transformed into a goal by Almeida. In the 34th minute, Simao's left pass made it inside the penalty field to Quaresma who shot an unfortunate header that did not make it through. The first half was especially marked by a series of plays set up by Simao and Quaresma in the wings.
The pressure continued on in the second half of the game. Dinamo Kiev's attitude of sufficing for a single point only worked to further ignite Beşiktaş's intentions.
The long anticipated goal in İnönü came in the 68th minute of the game. A corner shot by Simao, was met by a flying Egemen from the rear: 1-0. Scoring the sole goal in last night's UEFA Europa League game, birthday boy 28-year-old Egemen Korkmaz truly had something to celebrate.
Beşiktaş has now secured the second spot from the top with six points, four points behind leaders Stoke and one point above Dinamo Kiev. Beşiktaş's next game for the Europa Cup will be played on December 1st, against M. Tel Aviv.