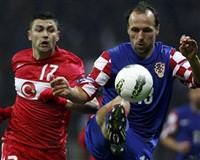 Croatia romped to a comfortable 3-0 victory away to Turkey in the first leg of their Euro 2012 playoff On Friday with goals from Ivica Olic, Mario Mandzukic and Vedran Corluka taking them to the brink of the finals.

Boos rang around the stadium at the final whistle and the result will pile more pressure on Turkey coach Guus Hiddink who was already under fire after a patchy campaign in the qualifiers in which they finished second in Group A.
Olic put the visitors ahead in the second minute with a simple tap in from close range after goalkeeper Volkan Demirel failed to cut out a low cross from Vedran Corluka and the evening did not get any better for the Turks.
"Nobody can expect a result like this when they come to Turkey," Croatia coach Slaven Bilic, who patrolled the technical area in a smart suit and bobble hat, told reporters. "We know Turkey is a very emotional team and we are too so that goal lifted us." Despite a long period of Turkey possession after the Croatia opener, the visitors doubled their lead in the 32nd minute when Mandzukic headed in a cross from Darijo Srna at the far post. Turkey's misery was complete in the second half as Corluka made it 3-0 in the 51st minute, escaping his marker and heading in from close range from a free kick whipped in by Srna.
The return leg will be in Zagreb on Nov. 15 although few of the Turkish fans inside the Turk Telekom Arena will retain much hope that their team can turn the tie around. Goalkeeper Volkan was jeered in the latter stages of the game and there were chants for Hiddink's resignation. "It was almost decided in the second minute because they are a very experienced Croatia team and they play in the strongest leagues in Europe," Hiddink said in a post-match TV interview. "We outplayed them for a while but the second on the counter attack before halftime made it very difficult to overcome them," he added. "It's almost decided now but maybe we will start some new players and they will play for the honour of themselves." Four Turkish players - Arda Turan, Sabri Sarioglu, Emre Belozoglu and Hakan Balta - are suspended for the return.
It was an especially sweet victory for Croatia who suffered a heart-breaking quarter-final defeat by Turkey at the 2008 finals when they were seconds away from clinching a semi-final berth before losing the clash in Vienna on penalties. The Turks had equalized with the last kick of extra time and then won the shootout. "It is a fantastic result but it is only half time and it is not over. We have to stay concentrated," Bilic said.