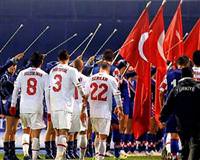 A 0-0 home draw on a bitterly cold night handed Croatia a 3-0 aggregate win over Turkey in their playoff on Tuesday and a place in the Euro 2012 finals.

While the result completed Croatia's revenge over Turkey for a painful and dramatic defeat in their Euro 2008 quarter-final, it also signalled a likely end of Guus Hiddink's spell in charge of the Turkish national team.

"The possibility is big that this was my last game with Turkey," the 65-year old Dutchman told a news conference after he was asked if he would step down.

"I don't know what will happen next, I want to take some time off to reflect on this campaign and consider my options.

"My age is also a factor and although I am not thinking about retirement, I might prefer a role away from the spot lights as a consultant or an advisor but I haven't made my mind up for the future," he said.

Turkey were a much improved side in Zagreb after a poor performance in the first leg in Istanbul, but Croatia comfortably held their own in front of a passionate 25,000 home crowd in the Maksimir stadium.

Facing the mammoth task of overhauling the first-leg deficit, Turkey threw men forward from the kick off and missed a double chance to take the lead on the night in the fifth minute.

Midfielder Selcuk Inan's cross from the left hit the far post and when the rebound fell kindly for Kazim Kazim, Croatia's keeper Stipe Pletikosa kept out the striker's close-range shot with a superb reflex save.

Croatia quickly regained their composure and launched several raids down the right flank, with captain Darijo Srna delivering a teasing cross for Mario Mandzukic whose header was deflected over the bar by a defender.

Mandzukic missed Croatia's best chance in the first half when he misfired high and wide from 10 metres after good work by Ivica Olic, who also teed up Srna to shoot over the bar shortly before the interval.

Croatia left back Danijel Pranjic saw his shot from 20 metres deflected just wide on the hour, before Hamit Altintop came close with a stinging low drive at the other end barely a minute later.

Croatia winger Ivan Rakitic then had a swerving shot pushed around the post by Sinan Bolat before he side-footed the ball wide from eight metres with only the Turkish keeper to beat after a delightful one-two with Srna. Rakitic was again unlucky in the closing stages, when his piledriver from 20 metres shaved a defender and skimmed the bar before Tottenham midfielder Luka Modric had a shot blocked by a defender in the dying minutes.

Jubilant home fans lit flares shortly before the final whistle and hurled one on the pitch, narrowly missing their own goalkeeper.

"We knew this was going to be a tough and anxious match for us, especially the opening stages, so we are delighted to have got the job done thanks to a fantastic first-leg performance," said Croatia coach Slaven Bilic.

"We are also aware that we are not better than Turkey by a three-goal margin and that everything worked for us in Istanbul, so we were a bit nervous knowing that we could easily run into trouble if they scored an early goal.

"We are going to Poland and Ukraine with the ambition to win Euro 2012, much like the other 15 teams, but we also know that we could be knocked out in the group stage because no one is going there to just make up the numbers.