Beşiktaş vs. Galatasaray in İnönü 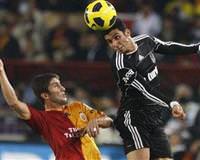 Tomorrow night, Beşiktaş and Galatasaray face off or the second derby of this year’s Spor Toto Super League season.

With 17 points at present, Beşiktaş aims to come out the victors in order to gain superiority over arch rivals Galatasaray's 18 points as well to establish themselves as contenders in the race for the top spot in the league.

Beşiktaş's sole injured player at present is Ekrem Dağ, while whether or not Rüştü Reçber and İbrahim Toraman will be cleared from past injuries by technical director Carlos Carvalhal and played tomorrow night has yet to be determined.

-All eyes on the Portuguese-
Beşiktaş's biggest ammunition in tomorrow evening's derby game will be the team's Portuguese players.

Fans will be watching out for Ricardo Quaresma, Simao Sabrosa and Hugo Almeida's performance in tomorrow night's derby. Thus far, Simao has scored three goals in the Spor Toto Super League and Almeida two, while Quaresma, who has yet to make an opening this season, is expected to score in the derby.
Carvalhal will most likely add all three to the starting line-up. The defense is anticipated to stay the same, consisting of Hilbert, Egemen Korkmaz, Sivok and İsmail Köybaşı. Carvalhal is expected to play Ernst, Aurelio and to give Veli Kavlak a chance in the mid-field. .

Meanwhile, the Portuguese technical director may have trouble determining who to play as goalkeeper. Carvalhal will have to choose between a recently injured Rüştü Reçber and Cenk Gönen, who has displayed a successful performance of late.

Çakır will be assisted by Bahattin Duran and Tarık Ongun. The derby's fourth referee will be Süleyman Abay.

GALATASARAY FRONT
Tomorrow night Galatasaray and Technical Director Fatih Terim will be seeking out a win in the Spor Toto Süper League's second derby of the season.
With footballers Engin Baytar, Gökhan Zan and Sabri Sarıoğlu having recovered from injuries prior to the derby, possible alternatives for the team's line-up have increased. The sole player who will be missing from Galatasaray is Yekta Kurtuluş, who has been suffering from a long-standing injury.
-Intending to put an end to bad statistics-
With a few unfortunately noticeable statistics behind them, Galatasaray will be aiming for a victory against Beşiktaş and to turn a new page.

With just a single win against Beşiktaş at İnönü Stadium over the past 15 games played, and just a sole win against Fenerbahçe and Beşiktaş in the past 26 derbies played, adding to the fact that Galatasaray has yet to win a league derby since 2010, the team aims to put an end to the bad statistics that have befallen them in the past.
Fatih Terim, who is on his third term at the helm of Galatasaray, has yet to secure a derby win against Beşiktaş at İnönü Stadium and intends to change that tomorrow night.

-Terim's preferences-
Galatasaray Technical Director may also have some options in tomorrow night's line-up due to the recovery of a number of the team's injured players.

Having played Ujfalusi and Semih Kaya during the time when Servet Çetin was injured and had a card penalty and Gökhan Zan was out with an injury, and been pleased with their performance, the experienced technical director may have a choice to make. Terim is expected to have to make a choice between an inexperienced but in shape Semih Kaya and former Beşiktaş player Gökhan who has just recovered from an injury yet is experienced with these types of matches.
In the mid field, Terim may have to choose between Riera, whose performance has been questionable or Engin Baytar, who has recently recovered from an injury as well as between Ayhan Akman ande Sabri Sarıoğlu.

-Probable 11-
Galatasaray is expected to play the following line-up against Beşiktaş tomorrow night: