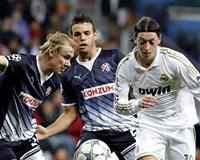 Real Madrid underlined their strength in depth when a weakened side hammered Dinamo Zagreb 6-2 to guarantee top spot in Champions League Group D on Tuesday.

Karim Benzema netted inside two minutes, Jose Callejon doubled the lead four minutes later, Gonzalo Higuain made it 3-0 in the ninth, and Mesut Özil rang up the fourth in the 20th as they made a whirlwind start at a rain-soaked Bernabeu.

Real's pace and aggression were too much for the Croatian champions and Callejon and Benzema scored again after the break.

Zagreb's Fatos Beqiraj scored the first goal against Real in Europe this season with a header in the 81st and Ivan Tomecak bundled in a second at the end as the hosts eased off.

Real's victory canter made it five wins from five in the group, and 12 on the trot in all competitions, putting them seven points ahead of second-placed Ajax Amsterdam.

"It was the first time Zagreb had played here, our first three attacks ended up as goals, it must have been traumatic for them.

"Madrid showed a great deal of confidence with many first choices out of the team and it hasn't affected our performance at all, so we are very pleased.

"The team is on a positive run and tonight proves the coach has a lot of players he can rely on which is a good sign."

Real coach Jose Mourinho, who rested Iker Casillas and Cristiano Ronaldo, handed Turkey midfielder Nuri Şahin his first start in midfield after an injury-delayed start to his Madrid career, and the hosts stormed into the lead.

Argentine Higuain cut inside his marker and then dinked the ball over the keeper at his near post, before Germany's Özil put away a loose ball after Higuain's shot had been parried.

Callejon broke the offside trap to slot away number five in the 49th and Benzema made it 6-0 on 66 minutes.

As the game ran out of steam Beqiraj nodded in a neat goal, Benzema blasted an overhead kick against the crossbar and Tomecak scored the visitors' second goal of the campaign.