Trabzonspor secure a point and Inter through after 1-1 draw 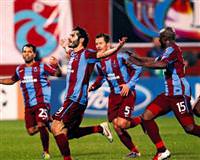 Inter Milan, already through to the Champions League last 16, topped Group B thanks to a 1-1 draw at Trabzonspor on Tuesday despite a flurry of chances for the Turkish side.

Ricardo Alvarez put Inter ahead on 18 minutes but Halil Altintop replied five minutes later for Trabzon who had stunned the Italians with a 1-0 win in their Champions League debut at the San Siro in September.

Inter had already qualified for the next stage thanks to Lille's 2-0 win at CSKA Moscow earlier on Tuesday but second place is up for grabs heading into the final round of matches.

Trabzonspor have six points with their two rivals for second place on five going into next month's fixtures when the Turks visit French champions Lille while CSKA travel to Inter.

The early pressure came from Trabzonspor with four shots at Inter's goal in the first 10 minutes but the Italians took the lead with their first chance.

Argentine midfielder Alvarez surged into the penalty area, playing a wonderful one-two with fellow countryman Diego Milito before coolly slotting the ball home from 10 metres out.

However, five minutes later Trabzonspor got a deserved equaliser when Argentine attacking midfielder Gustavo Colman slid a short pass to Altintop who thundered in a shot off the underside of the bar with the help of a slight deflection.

"It wasn't important how the goal was scored or who scored it. It was important for Trabzonspor, that's why we are all very happy," Altintop stated after the game.

"We are satisfied with one point. I believe if we continue to work the way we did we will also get to the second round."

The hosts only made the group stage after Turkish champions Fenerbahce were barred in connection with a match-fixing investigation.

Altintop said his side were performing well despite their Champions League inexperience.

"Despite this being our first championship we are really playing a good championship season. I hope we will be in the Champions League in future seasons and we can gain more experience and I am sure we will be able to play better matches," he said.

"If we continue on this road I think we will get a good result at Lille and we will be the side that is laughing."