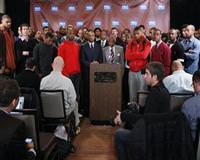 The National Basketball Association (NBA) and its players have reached a tentative deal on a new collective bargaining agreement which paves the way for a 66-game season starting on Christmas Day.

Financial details of the plan were not released but NBA Commissioner David Stern said the settlement called for training camps and the league's free agency period to begin on December 9.

"We've reached a tentative understanding that is subject to a variety of approvals and very complex machinations," Stern told a news conference early on Saturday after a 15-hour negotiating session.

"But we're optimistic that will all come to pass and that the NBA season will begin on December 25, Christmas Day, with a triple-header.

"We're very pleased that we've come this far. There's still a lot of work to be done in a lot of places, with a lot of committees and player groups and the like.

"But we're optimistic that it will hold and we'll have ourselves an NBA season."

Stern said the deal would be put before the owners' labor relations committee during a teleconference later on Saturday, before being passed on to the overall Board of Governors.

Billy Hunter, the former executive director of the players' now-disbanded union, said: "We're going to turn it all over to the lawyers here and have them work out all the details."

The players de-certified their union in an effort to file a variety of antitrust lawsuits against the league. It could take up to 10 days for the players to re-form their union and ratify a formal labor deal.

Stern acknowledged the league had "literally thousands of people who are dependent upon the playing of our games at arenas, at parking lots, at restaurants around the stadium."

"The reason for the settlement is (that) we've got fans, we've got players who would like to play, we've got others who are dependent on us," he said.

"And it's always been our goal to reach a deal that was fair to both sides and would get us playing as soon as possible. But, that took a little time."

Players have been locked out of NBA facilities for 149 days and, should the plan proceed as scheduled, teams would play 16 games less than a normal season.

The league has said it lost $300 million last season and were demanding a reduction in the players' share of income, which was 57 percent under the prior deal.

"It will largely prevent the high spending teams from competing in the free agency market in a way that they have been able to in the past," he said.

"It is a compromise and it is not the system we sought out to get in terms of a harder (salary) cap but the luxury tax is harsher than it was in the past deal and we hope it's effective.

"We feel ultimately it will give fans in every community hope that their team can compete for championships and that their basis for believing in their team will be a function of management of that team rather than how deep the owners pockets are or how large the market is."

Stern said he was optimistic both sides would approve the deal.

"We want to play basketball," he said.