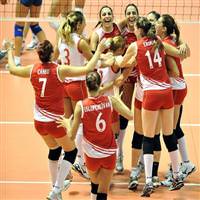 Turkey may soon be bringing home a total of six European cups for successes in both basketball and volleyball. By making the Champion’s League final four, Arkas has signed on to a first.

Turkey's basketball and volleyball is experiencing a golden era in European cups. With a total of seven teams competing, including both men and women branches, Turkey is well on its way to becoming a European champion. In men's volleyball, Turkey's Arkas team eliminated Lokomotiv Mokova in the golden set and has now become the first ever Turkish team to make the final four in the Champions League.

Playing in the same cup, our women's team Fenerbahçe Universal has now made it to the Final Four for the third time in a row and is currently considered top choice for the championship. Meanwhile, Galatasaray has made the semifinals for the CEV Cup and will be playing against Romanian team Tomis Constanta for the final. In basketball, four Turkish teams are currently competing in three different FIBA organizations… Beşiktaş's male basketball team is especially considered a favorite for the Eurochallenge Cup. They have been paired against German representatives Artland Dragons for the quarter finals.

In the FIBA Women's European League Final Eight, archrivals Fenerbahçe and Galatasaray Medical Park are pegged as favorites. However, the fact that our two representatives have fallen into Group A and will play against each other is unfortunate. Also in the Women's Eurocup is Kayseri KASKİ, whom by eliminating BOTAŞ and making the finals, will be facing off against Dinamo Kursk, which beat them twice in the group stage for a double game final. However, everyone in KASKİ believes that the cup will be coming home to Turkey.

FIRST RIVALS ARE CUP HOSTS!
On March 7th, Arkas' first rivals in the Final Four played in Lodz, Poland will be hosts PGA Skra Belchatow. The Izmir team has yet to lose on their home field. Arkas' star player Agamez is in the top spot, with a ten game average of 21.6 points. Meanwhile, Burutay has placed second for ace serves.