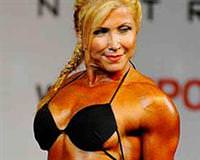 Işıl Aktan, a correspondent for Turkey's state-run TRT television was named Turkey's Champion Female Bodybuilder. Aktan had intended to wear a black ribbon around her ankle when she took the podyum in order to protest violence against women; however the committee prohibited her from doing so.

Aktan, who has been a correspondent for TRT for 19 years now, reclaimed her championship title, and received her award from Turkey's Body Bulding Federation member Sinan Şimşek. Aktan will go on to compete in the championship held in Spain on May 7th to the 8th.