The ‘Sultans of the Net’ set a historical first 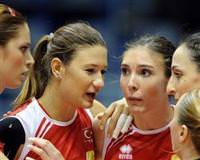 In the second match of the third leg of the Volleyball World Grand Prix, held in Japan, Turkey’s Women’s National Volleyball Team managed to beat their hosts by 3-1, securing a spot in the finals to be held in China.

Turkey's Women's Volleyball Team has secured six victories out of seven games played when they faced off against Japan, which brought them yet another victory and a guaranteed spot in the finals prior to the completion of the third round of games.

This is the second time our national team has played in the World Grand Prix and the first time they have secured a spot in the finals, regardless of the outcome of tomorrow's final game in the third leg to be played against Germany.

While Turkey has managed to rise four levels up at once with last night's win, placing them in third place, their rivals Japan have now lost any chance of making it to the finals.


The World Grand Prix finals will be held in Ningbo, China between the dates of June 27th and July 1st.