Turkey is a strong Olympic contender 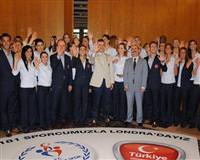 The athletes that will be competing for Turkey in this summer’s Olympics departed for London yesterday. Their goal is to return with a record-breaking medal win.

Turkey's athletic contenders for the 2012 London Olympics were ushered off to London with a ceremony held in their honor at the Atatürk Airport yesterday.

After saying goodbye to their families and loved ones, the athletes were flown by private plane to London. The excitement showed on the faces of the 114 athletes, 66 of which are women, who will be competing in the ultimate international arena for their country.

This year's Olympics, which kicks off on July 27th in London, marks the first time Turkey's national women's basketball and volleyball teams have qualified to compete. During the 17-day London Olympics, a total 10,500 athletes from 204 countries will be competing for medals. National volleyball player Neslihan Darnel, who will be holding the Turkish flag for the procession during the opening ceremony, expressed how excited and proud she was to be able to have this opportunity.

Meanwhile, Prime Minister Recep Tayyip Erdoğan also departs for London tomorrow. Erdoğan will be meeting with Britain's Prime Minister David Cameron on Friday and will attend the Olympics opening ceremony as his guest.