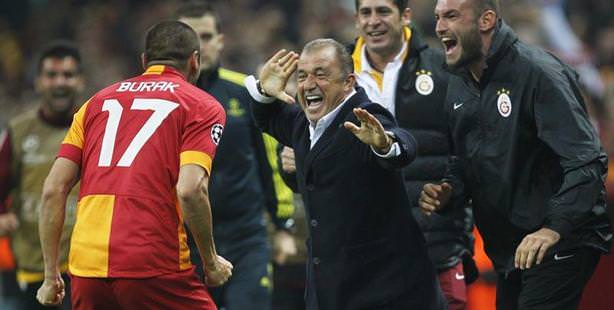 Galatasaray earned a 1-0 victory in a hard-fought battle with a young Manchester United side on Tuesday, snatching the win through a Burak Yılmaz header in their Group H Champions League game.

The victory boosted Galatasaray's hopes of reaching the knockout stage, putting them in second place in the group, behind United who had already qualified after four wins in their first four matches.
Burak put the Turkish champions ahead in the 53rd minute; heading into the top left corner above the head of Rafael after Felipe Melo had gone close seconds earlier and won a corner. Hamit Altintop just failed to double Galatasaray's lead in the 78th minute with a powerful shot which flew off the crossbar.

After a cagey start, Galatasaray became more of a threat as the first half progressed, pinning the visitors back into their own half but creating few goal-scoring opportunities. Striker Burak headed over the bar from a Selçuk Inan free kick in the 21st minute.

Galatasaray went close again some 10 minutes later when a strike from Hamit forced a save from Anders Lindegaard and United scrambled the ball away. United worked hard to keep possession and neutralize any threat from Galatasaray and had chances of their own in the first half. Eighteen-year-old Nick Powell, on his Champions League debut, saw his header fly off the crossbar in the 43rd minute.

Galatasaray started the second half in determined fashion and an Albert Riera volley from outside the penalty area was saved by Lindegaard in the 49th minute. United stepped up a gear and sought to find a way back into the game but Galatasaray survived a late bout of pressure to secure the points.

United manager Alex Ferguson said: "Parts of the game were good but in the area which we were worried about - set pieces - we suffered. "Other than that I was satisfied and it was a decent performance," Ferguson said. "We had some good attacking play in the first half and at that point the only trouble they gave us was from outside the box. It was a very competitive, good game."

GALATASARAY ARE WELL ON THEIR WAY TO KNOCK-OUT ROUND

"Beating Manchester United is important," said Galatasaray coach Fatih Terim. "We played brilliantly and unselfishly. My players played football in a way we have been expecting for a long time.
"We are very hopeful for second place," he added. "There is no guarantee in football but we will play well at Braga who no longer have any chance."

In their final match on Dec. 5, Galatasaray, who are ahead of CFR Cluj on goal difference, will play Braga. The Portuguese side, which lost 3-1 to Cluj, are already out of the competition on three points.

The final round of games in the Group stage to determine the final 16 will be the Braga-Galatasaray and Manchester United-CFR Cluj face-offs. If Galatasaray wins against Braga, which is taking up the rear in group scores, Turkey's representatives will have secured a stop in the final 16. Regardless, Galatasaray's European adventured is guaranteed to continue, because no matter what with Braga's latest loss, the UEFA Europa seat is open to the group third.