The world’s most exciting derby 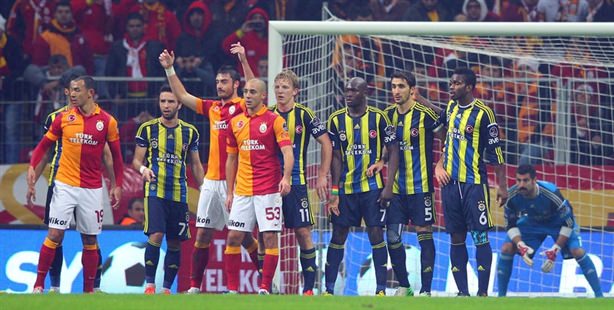 Last night’s Fenerbahçe-Galatasaray derby at the arena was a heart-stopping exciting state of affairs and perfect near-close of the year in football.

The first half was all actions… Riera's center pass was sent by Bekir to his own goalpost. Minutes later Hasan Ali brought on the draw. Then, Galatasaray managed to hit Fenerbahçe where it hurt with a free-kick by Selçuk, securing the victory. With last night's 2-1 win for hosts Galatasaray, Fenerbahçe's hopes of returning home in the leadership position were thwarted while Galatasaray brought their point difference up by five, guaranteeing the number one spot in the league as they go into the New Year.

The game did not start out great for the Türk Telekom Arena visitors Fenerbahçe. Arriving with high inspirations, a header into the team's own goalpost by Bekir İrtegün in just the first ten minutes was a shock. Fenerbahçe maintained composure and continued exerting solid pressure on the Galatasaray defense until they found an equalizer in the 23rd minutes by Hasan Ali Kaldırım.

In the 33rd minute, Fenerbahçe midfielder Cristian Baroni took down Selçuk Inan, securing the Galatasaray captain a free kick. After extensive pushing and shoving and two stoppages by the referee, When Inan finally got to strike he did so perfectly taking the hosts into halftime with a 2-1 lead.

Galatasaray managed to maintain that lead through the second half, with no real threat of Fenerbahçe equalizing. In the 82nd minute, Raul Miereles brought down Yeka Kurtulus which led to a second yellow card and the Fenerbahçe player being sent off the field in the 82nd minute.

Galatasaray now holds a five-point lead at 32 in the point standings for the Spor Toto Super League over Fenerbahçe, which is in third place with 27 points, equal to Beşiktaş in points however taking up the rear in goal averages.