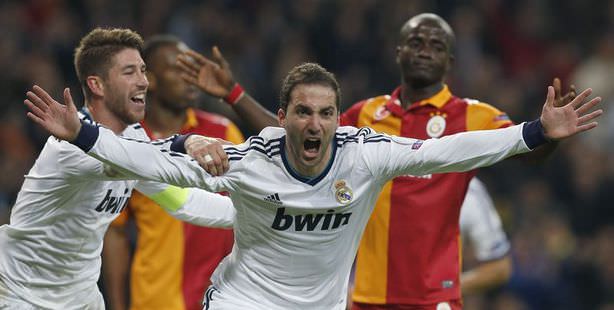 Cristiano Ronaldo, Karim Benzema and Gonzalo Higuain scored to give Real Madrid a commanding 3-0 home win over Galatasaray in their Champions League quarter-final first leg on Wednesday played in Madrid.

Portugal forward Ronaldo became the tournament's highest scorer with nine goals when he burst away on to Mesut Özil's pass to lob the opener after nine minutes. Benzema slotted the ball inside Fernando Muslera's near post for the second after 29 minutes and substitute Higuain flicked a header into the top corner at a freekick in the 73rd.

After taking an early lead, Real Madrid looked dangerous every time they broke forward, while Ivorian striker Didier Drogba, up against his former coach Jose Mourinho, provided the main threat for the visitors. Drogba showed flashes of his old self and a clever turn after 12 minutes left him free on the edge of the area but he fired wastefully high and wide when he had more time than he realized. A long-range effort was straight at Lopez, and he then danced past Sergio Ramos to set up Burak Yilmaz, but the striker volleyed wide. Just before halftime the visitors carved their clearest chance, Drogba playing a one-two with Emmanuel Eboue, but the fullback's low shot with the only the keeper to beat was stopped by Lopez's outstretched boot. Forward Burak Yilmaz, who was tied with Ronaldo for the goal king title at the start of the game, suffered a late contentious card which has him missing the return leg.

On what was a near-perfect night for Real, midfielder Xabi Alonso and centre back Sergio Ramos both picked up yellow cards late in the game to trigger one-match suspensions. The Spain internationals can now serve out their bans in the second leg, giving them a clean slate for the semi-finals should Real advance as expected.

"Real Madrid played a very good, balanced match," Real coach Mourinho told a news conference. "The team worked very hard and to score an early goal makes all the difference. It changes the game."
Asked if he felt confident of progressing in Istanbul next Tuesday, Mourinho sounded a note of caution. "I know the mentality of some their players and of their coach," he said. "They will look to do something historic. They need a miracle but I have enough experience in football to know miracles happen."

Galatasaray coach Fatih Terim had a dig at referee Svein Oddvar Moen saying he had influenced the result by failing to show cards and by waving away two penalty calls, but was honest about his team's shortcomings. "Many of our players have a lot of experience but it is very hard playing in such a big stadium in front of so many people," he told a news conference.

"The difference in quality between the teams and the players is noticeable. I'm sure my players wanted to try things to change the game but they couldn't. "After a 3-0 result we need a miracle."

There was a crackling atmosphere at the Bernabeu thanks to Galatasaray's impressive number of red and orange draped travelling supporters.

Real Madrid showed the attacking power that could carry them to an unprecedented 10th European Cup with their victory virtually guaranteed them a semi-final place because Galatasaray would have to achieve the most unlikely of turnarounds to rescue the tie in Istanbul on Tuesday.