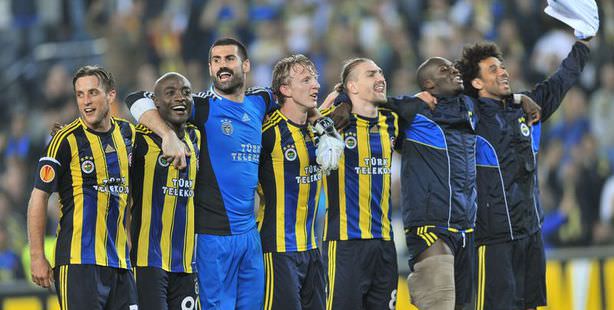 Hosts Fenerbahçe scored two late goals to down 10-man Lazio 2-0 and seize the advantage after their Europa League quarter-final first leg on Thursday.

Pierre Webo scored a penalty in the 78th minute, sending Federico Marchetti the wrong way, after defender Stefan Radu had handled the ball. However, Dirk Kuyt secured the victory for Fenerbahçe in injury time, netting after a long range free kick from Mehmet Topuz was saved by Marchetti.

Lazio were facing a losing battle from the moment Ogenyi Onazi was sent off just after the break for a second yellow card having looked the better side in the first half. Ederson had a decent chance but the Italians failed to make spells of dominance pay and it was Fenerbahçe who came closest to scoring when Moussa Sow's shot came back off the woodwork in the 16th minute.

Fenerbahçe's spirits were lifted by the red card in the second half and Raul Meireles had a number of opportunities before the home side finally made the breakthrough in front of 45,000 supporters happy to be back after previous stadium bans.

The Turks are not the only ones to have suffered UEFA's wrath this term. Lazio will host the second leg next Thursday in an empty stadium after Europe's governing body banned fans for racist behavior.