Fenerbahçe wins 2-0 to Galatasaray at home 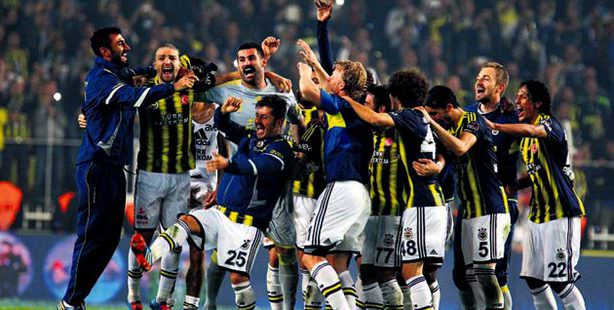 Last night’s hosts Fenerbahçe secured their spot at the top of the Turkish Super League with a 2-0 win over archrivals and reigning champions Galatasaray.

Fenerbahçe were the victors last night by 2-0 against Galatasaray, managing to maintain a nearly 15-year streak of suffering no derby losses on their home turf, the Şükrü Saraçoğlu Stadium in Kadıköy. The last time Fenerbahçe suffered a loss at home in a derby was back in 1999.

Nonetheless, Fenerbahçe have retained their top position in the Spor Toto Super League with 28 points, while Galatasaray has now fallen to sixth place with 19 points. Fenerbahçe coach Ersun Yanal was freshly released from a minor coronary operation just a day before the game. While Galatasaray suffered from a series of absent players due to injuries, most noteworthy of which was Wesley Snejder and goalkeeper Fernando Muslera. With Muslera out with a broken big toe, and Galatasaray's second goalkeeper Ufuk Ceylan also suffering an injury it was young goalkeeper Eray İşcan who guarded yesterday's post with just 100 minutes of Super League play time under his belt prior to last night's derby.

Fenerbahçe's first goal came in the 23rd minute when a penalty shot was called for Chedjou's interference of Caner Erkin's cross. Emre Belözoğlu shot the ball to the left, which Eray narrowly missed from saving.

Christain Baroni sealed the deal in the 66th minute when he scored into an empty goal from a pass by Webo, who smartly called off Emenike who was in an offside position had he taken the ball.


Galatasaray tried vehemently to pursue a score but only came closest to doing so in injury time when they were awarded a penalty shot, for Mehmet Topal's handling the ball within the penalty lines. Yet an injured Volkan Demirel managed to save the visitors' last-ditch effort shot by Felipe Melo.

Galatasaray will have to recover from the loss soon as a high-stakes Champions League game awaits on November 27th when Real Madrid will host Turkey's reps who are vying against Juventus for a second place spot in the Group B qualifying round. Meanwhile, a week later Beşiktaş will host Fenerbahçe for the league's other major derby.