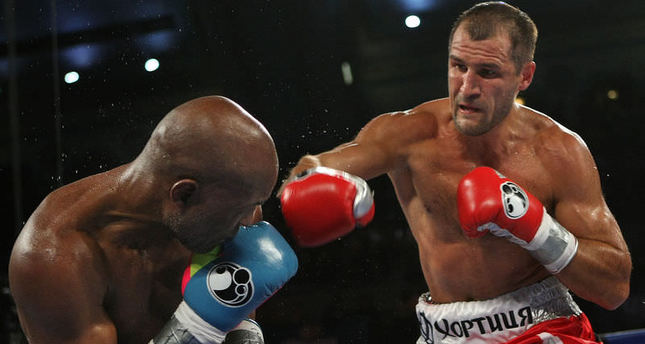 by reuters
Nov 09, 2014 12:00 am
Russia's Sergey Kovalev came up with a masterful performance to overwhelm 49-year-old Bernard Hopkins, who finally looked his age in their light heavyweight unification bout in Atlantic City on Saturday. American Hopkins, who turns 50 in January, was knocked down in the first but survived all 12 rounds despite being put under constant pressure by the 31-year-old Kovalev, who walked away from the lop-sided fight with a unanimous decision.

The Florida-based Russian added the IBF and WBA titles to his WBO crown after he was awarded the fight by 120-106, 120-107 and 120-107 margins on the judges scorecards. "I'm very happy," the undefeated Kovalev (26-0-1), who missed the birth of his first child to train for the bout, was quoted as saying by ESPN.com. "This victory was for my son Aleksandr. I was very excited (Hopkins) didn't get into my head." The oldest boxer to win a world title, Hopkins (55-7-2-2) could not conjure up the kind of magic that had served him so well in the past and took a beating against a much younger and hungrier opponent. "I give him a lot of respect," the popular American said. "We both would fight anyone and that's how we ended up here tonight. That's what brought us together. That's what the people want to see, one title, one belt, one champion."