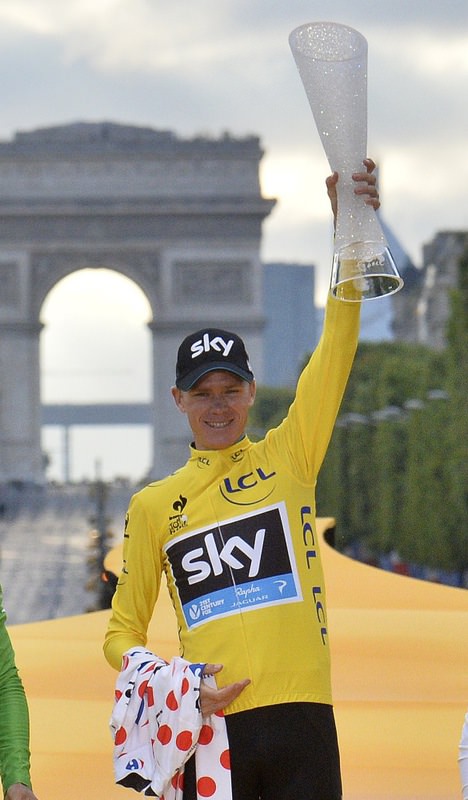 by Jul 27, 2015 12:00 am
This year's Tour de France had been advertised as an exciting battle royale between four great riders yet it panned out as an underwhelming contest as Chris Froome's rivals failed to live up to expectations. Team Sky's Froome beat Nairo Quintana, who won the white jersey for the best Under-25 rider, by 1:12 after resisting the Colombian's late charge in the Alps. But the Movistar rider, who eventually seemed slightly better in the mountains, left it too late to overturn the deficit he conceded in a treacherous first week that also showed that defending champion Vincenzo Nibali would struggle. "Ironically, the contest between two great climbers was decided on a flat stage," said Tour director Christian Prudhomme, who had peppered the course with pitfalls. Italian Nibali possibly lost the Tour at the point where he made his mark last year, in the second stage when he was trapped behind a bunch split as high winds blew through the Netherlands, where Froome started to chip time away from his rivals.

Among Froome's Big Four rivals - Alberto Contador, Nibali and Quintana - only Spaniard Contador stayed within touch of the Briton that day. But Contador eventually paid for his lack of fitness after a gruelling Giro d'Italia, failing in his bid to become the first main since 1998 to achieve the Giro/Tour double. Froome put down his marker on the Tour in the first mountain stage before riding defensively, his main concern being off the bike as the atmosphere turned sour with doping suspicions arising. Team Sky published their rider's power data in order to end the row, arguing that some 'irresponsible reporting' pushed a spectator to throw urine at Froome, who was also jeered and spat at. Froome, however, stayed on his bike, unlike earlier leaders Fabian Cancellara and Tony Martin, who left the race after crashing in an incident-ridden race.