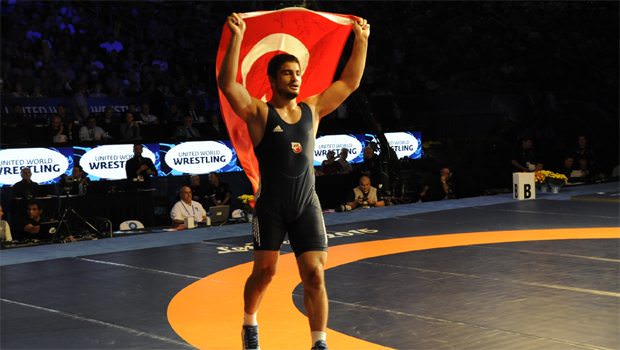 by Daily Sabah with Agencies Sep 13, 2015 12:00 am
Turkey's Taha Akgul took the heavyweight title on Saturday night at the Wrestling World Championships (125 kilograms; 275 pounds) for the second year in a row.

The Turkish wrestler Akgül took on Azerbaijani Jamaladdin Magomedov in the final, taking only 62 seconds for the 10-0 win to capture his second straight world title.

Turkish wrestler Selim Yasar won Friday the silver medal in the men's 86-kilogram freestyle category in the 2015 World Wrestling Championships in Las Vegas, in the U.S.

Yasar was defeated by Russian wrestler Abdulrashid Sadulaev 6-0 in final at the Orleans Arena.

"I present this medal to families of martyrs. God bless our martyrs. I will work hard and I believe that I will obtain the gold medal, which is my target at the Olympics [in 2016]," Yasar told reporters after the match referring to the soldiers martyred by the PKK terrorist organization in recent clashes.