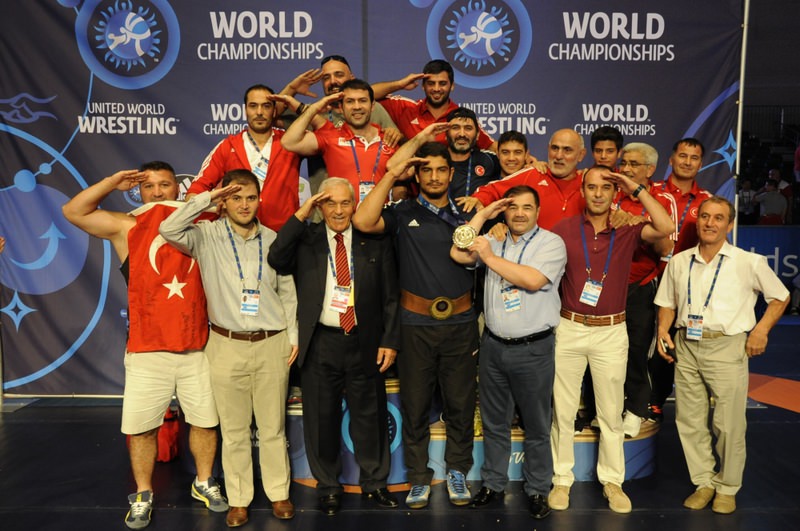 Akgu00fcl and Turkish team made a soldier salute after the medal ceremony, commemorating the Turkish security forces.
by Daily Sabah Sep 14, 2015 12:00 am

Taha Akgül took the heavyweight title (125 kilograms) for the second year in a row. Another Turkish wrestler Yakup Gör won the bronze medal in the men's 70-kilogram freestyle category

Considered an "Ancestor sport," Turkey has continued to rack up the medals in free-style wrestling at the World Championships. Turkish wrestler Taha Akgul won the gold medal Saturday in the men's 125-kilogram freestyle category in the 2015 World Wrestling Championships in Las Vegas.

Elsewhere, after blowing his shot at a world title in 2014, American Jordan Burroughs wondered if he was over the hill. He isn't. Burroughs won his third world crown Saturday to close the wrestling championships.

The 27-year-old Burroughs beat Mongolia's Unurbat Purevjav 10-0 at 74 kilograms for his fourth major title including gold at the London Games since 2011. Burroughs joined John Smith and Bruce Baumgartner on the short list of Americans with at least four combined Olympic and world titles. "I'm back, dude," Burroughs said.

"This felt great; it was amazing," Burroughs said about winning the title on American soil. He added, "It has been a difficult year fighting injuries and doubt, but there's no secret that you just have to do what's right and surround yourself with the best people."

Khinchegashvili rallied from a three-point deficit in the final minute and scored on a takedown with 10 seconds left to beat Iran's Hassan Rahimi, the world champion in 2013.

Bilyal Mahkov became the first wrestler in 42 years to win medals in both men's disciplines at a single world meet. Mahkov won bronze in Greco-Roman earlier this week and bronze on Saturday.

Despite losing in the semi-finals, Green, a fellow Nebraska Cornhusker and training partner of Burroughs, did well for himself in his international debut. Green, 22, won three matches before running into the more experienced Yazdanicharati, who proved to be on a different level in winning 9-4. Green then drilled Kirov for his first international medal.

"He's got an ability that's very similar to mine," Burroughs said. "He kind of replicates many of the things that I do."

Nevertheless, Russia took the freestyle team title with two champions, a silver medalist and four bronze medals for 61 points, followed by Iran with 48 points and Georgia with 44.
RELATED TOPICS