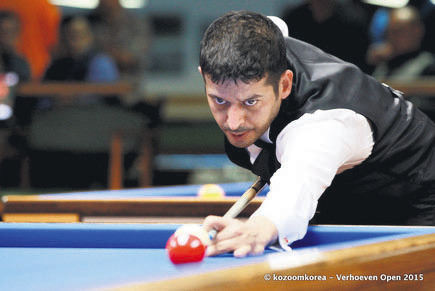 by daily sabah
Oct 20, 2015 12:00 am
Turkish snooker player Murat Naci Çoklu,41, won his first 3-Cushion World Cup this Sunday, beating Belgian Roland Forthomme in the final: 40-26. The overjoyed winner, the second Turk to grab a title this year, following in Tayfun Taşdemir's footsteps, was the best player in a tournament that saw the top-12 players go out the side door, one by one. Dick Jaspers, beaten by Çoklu in the semi-finals, and Eddy Merckx, beaten by Forthomme, completed the rostrum in the arena of the Zeytinoğlu Caddesi sports center in Beşiktaş, Istanbul. The other Turkish star of the year, Tayfun Taşdemir, got beaten by the eventual winner of the event on the second day of play.

The final was in the balance at 24-23, then the Turk dominated to make it 31-23 thanks to a run of seven. Forthomme had a troubled 10 innings, in which he only scored six times, and Çoklu could smell victory. Pushed by the noise of the crowd, he crossed the finish line to grab the win.

With 80 world ranking points added, Çoklu climbs to the 15th position on the list. Sameh Sidhom and HaengJik Kim (absent in Istanbul) dropped out of the top-12. Roland Forthomme benefitted from his 54 points to climb to ninth. Torbjörn Blomdahl was eliminated early, but is still the world No. 1, ahead of Dani Sánchez, Dick Jaspers, Tayfun Taşdemir and Eddy Merckx.

Dani Sanchez is the new leader in the overall World Cup standing for the season, with a small lead over Dick Jaspers and Torbjörn Blomdahl. The sixth and last World Cup will be played in Hurghada, from Dec. 13-19.