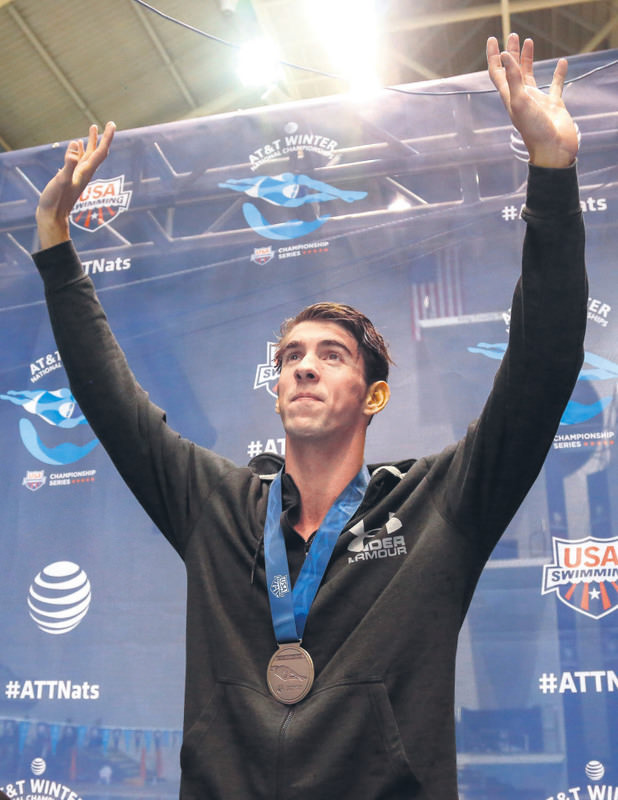 by Dec 07, 2015 12:00 am
American swim star Michael Phelps roared home to win the 200 meter butterfly and claim his third victory in as many days at the U.S. Winter National Championships on Saturday. The 18-time Olympic gold medalist and world record holder in the event clocked one minute, 56.11 seconds as he continues his preparations for an Olympic comeback next year in Rio de Janeiro, Brazil.

Chase Kalisz finished 1.01 seconds back in second while Dakota Hodgson was third in 1:59.09, three seconds slower than Phelps at the King County Aquatic Center in Seattle, Washington. Phelps was still well off his American record of 1:52.20 set in 2008. He set the world record of 1:51.51 a year later in Rome. Phelps swam the final 50 meters in 30.08 seconds to finish comfortably ahead of Kalisz, who was also the runner-up to Phelps in the 200 individual medley on Thursday. Phelps won the 100 meter butterfly on Friday. Reigning Olympic champ Missy Franklin swept the backstroke events by clocking time of 2:07.87 in the 200 meter race Saturday to defeat Maya DiRado (2:08.28). Franklin, who holds dual American and Canadian citizenship, won the 100 meter backstroke on Friday night. The world-record holder led wire to wire over four laps, but still had to finish strong to hold off DiRado.
RELATED TOPICS