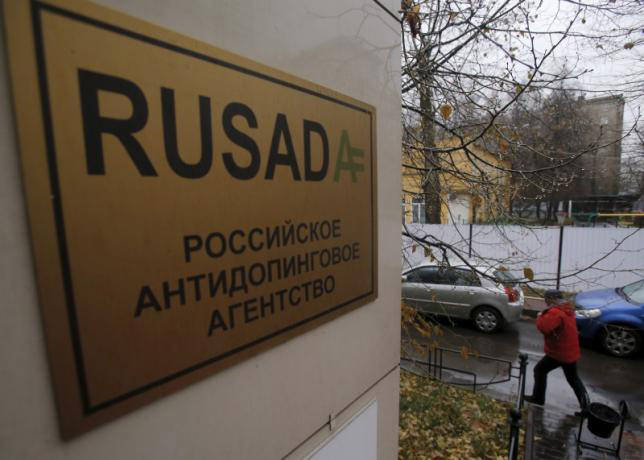 A man walks outside an office of the Russian Anti-Doping Agency (RUSADA) in Moscow, Russia, November 10, 2015. (REUTERS Photo)
by Dec 17, 2015 12:00 am
All the top managers of the Russian Anti-Doping Agency (RUSADA) have stepped down, R-Sport news agency said on Thursday, in the latest steps to clean up Russian athletics to avoid missing next year's Olympics.

Russia was suspended from international athletics last month after a special commission of the World Anti-Doping Agency exposed widespread state-sponsored cheating and corruption. It is working to lift the ban in time for its athletes to compete at the Rio Games next August.

"It was decided at a meeting attended by the heads of RUSADA that the general director, Ramil Khabriev, should be relieved of his position," R-Sport quoted Natalia Zhelanova, an adviser to the sports minister, as saying.

She said "all the high-level management" of the agency was stepping down.

Anna Antseliovich, head of RUSADA's Result Management and Investigation Department, has been named as the acting general director of the organisation.

Since Soviet times, Russia has invested heavily to ensure success at the Olympic Games and earn itself the status of sporting superpower, so banishment from Rio would be a severe blow to its prestige.

The sport's world governing body, the IAAF, said last week that Russia could only be reinstated to international competition if it complied with a detailed 'roadmap'.

Among the requirements were that Russia demonstrate that none of its sporting officials have any prior links to doping, and that RUSADA should be able to operate "effectively and without interference".

President Vladimir Putin said on Thursday that Russia was against doping in sport, and people who used it must be punished.