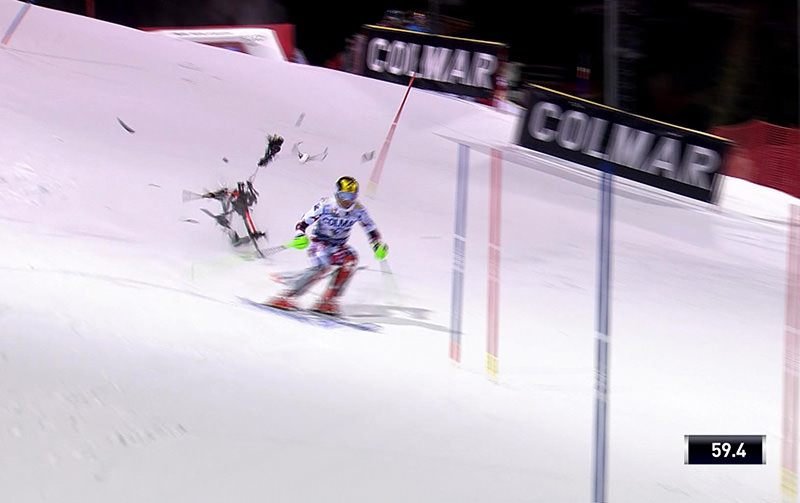 In this image taken from video a camera drone crashes into the snow narrowly missing Austria's Marcel Hirscher during an alpine ski (Infront Sport via AP)
by Compiled from Wire Services Dec 24, 2015 12:00 am
The international ski federation (FSI) is banning camera drones from its World Cup races after one of the flying objects crashed and nearly hit Austrian skier Marcel Hirscher during a slalom in Italy on Tuesday.

FIS will prohibit drones "as long as I am responsible ... because they are a bad thing for safety," men's race director Markus Waldner told The Associated Press on Wednesday, a day after the night race in Madonna di Campiglio.

"It was huge luck that Marcel was not hurt," Waldner said. "I am very angry."

Television pictures showed on Tuesday the four-time World Cup champion Marcel Hirscher in the middle of his second run in a World Cup slalom race when the drone crashed to the ground behind him, shattering into pieces.

"This is horrible," Hirscher, 26, said. "This can never happen again. This (could have caused) a serious injury."

"I didn't know what it was, but I felt something," Hirscher said. "I thought it was a course worker behind me, or a gate."

The company responsible for the drone, sports marketing agency Infront, said its initial investigation "indicates a malfunction of the drone."

"The most likely reason is a strong and unforeseen interference on the operating frequency, leading to limited operability," Infront said in a statement. "The pilot followed the official security procedure, purposely flying the drone as close as possible to the ground before releasing it. The aim was to destroy the drone, in order to prevent it from losing control."

Infront said the drone and its pilot were provided by a third party, adding that an external independent expert will formally investigate the matter.

"We are extremely relieved that apparently none was hurt," said Infront, a Switzerland-based agency that has been the long-term TV rights holder of the FIS Alpine skiing World Cup.

According to Waldner, FIS had agreed on the use of the drone at Tuesday's slalom but the pilot wasn't allowed to fly the camera directly over the race course.

"He did not follow our instructions," the race director said. "He had to fly outside of the race track and follow the racer from a 15-meter (50-foot) distance. Then there would have been a margin and nothing could have happened."

Drones have been used many times before at ski races. The ski federation said the technology was aimed at enhancing the experience for TV viewers as it provides moving pictures from an overhead angle which regular cameras can't shoot.

FIS said legal restrictions in Italy for the use of drones at events are not as tight as in many other countries, such as Austria and Switzerland, where flying over a crowd has been banned.
Last Update: Dec 24, 2015 1:27 pm
RELATED TOPICS