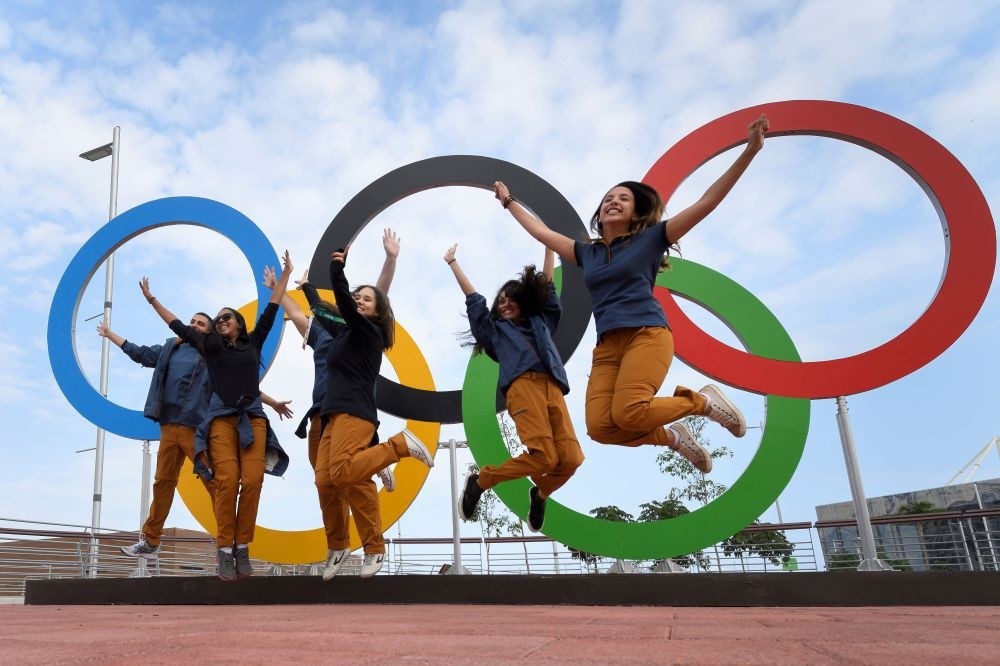 People jump for a picture in front of Olympic Rings set at the Olympic parc in Rio de Janeiro.
by Daily Sabah with Wires Aug 05, 2016 12:00 am

With the Rio de Janeiro Olympics set to open, worried IOC members grilled top organizing officials about traffic jams, water pollution, security, and the absence of signage that gives the games its own distinct look

Rio de Janeiro Olympics organisers remained under pressure to deliver a successful Games before they start with questions over water quality, traffic and security dominating the final progress report to the IOC on Wednesday. The first Olympics in South America are due to begin today and organisers are still rushing to complete venues and clean waters where swimmers, rowers and sailors will compete. Preparations have been severely hit by the worst economic crisis in the country since the 1930 and political turmoil.

"We have seen the difficulties and have always been in solidarity and now we have to deliver together great Games in great unity," International Olympic Committee President Thomas Bach told organisers.

"All praise is premature now and it can be left for Aug. 21 (closing ceremony). It's delivery time now and here we go."

The presentation of Games chief Carlos Nuzman and his executives was peppered with concerns from IOC members over the water quality in the lagoon and the Guanabara Bay as well as a lack of Olympic signage at stadiums. Organisers admitted they were working hard to improve the water quality that has been a major headache for competitors due to heavy pollution. They also said the company producing banners had been late in delivering them and it could take days before the stadiums display the Olympic and Rio Games logos for visitors to see. IOC members also grilled organisers over long security checks, notorious Rio traffic jams and funding. Rio 2016 CEO Sidney Levy said those three issues were his biggest concerns with the opening ceremony only 48 hours away. Transportation from Barra de Tijuca where the main Olympic park is located to central Rio and the Copacabana can take several hours during rush hour traffic.

"It is a real challenge how we will transport our people (from Barra to Copacabana)," Levy told the IOC. He said finding "the right balance between light security and heavy security" that creates long queues and has angered athletes.

"Finance, it has been very hard to balance that," Levy said.

Despite the setbacks during preparations and the IOC assisting organisers financially by fronting part of their contribution that was to be paid after the Games, Bach believes the Games will be a success.

"We are very confident we will celebrate great Games here in Rio and the world will be surprised to see what will happen here in the next two and a half weeks," Bach said.
Last Update: Aug 05, 2016 1:40 am
RELATED TOPICS