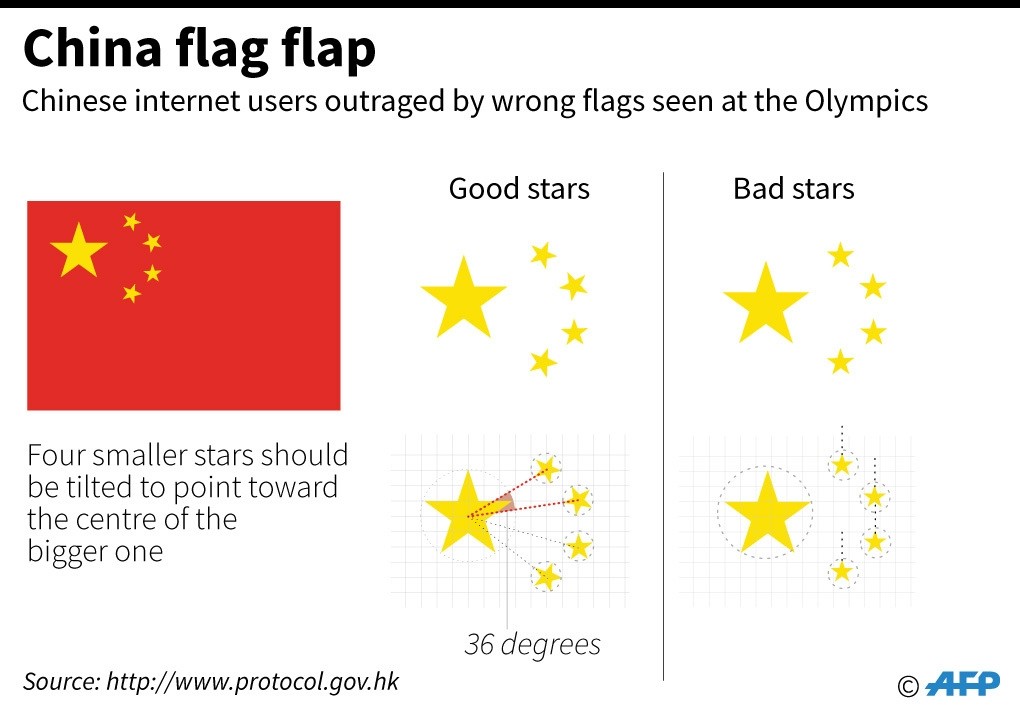 Most of the five stars on the Chinese flags being used at medal ceremonies at the Rio Olympics are misaligned, officials said, prompting a diplomatic protest and online fury.

Chinese internet users were quick to detect a "plot" against the world's most populous country, which came second in the medals table at London 2012, and branded the Brazilian organisers the "worst ever".

The Chinese flag features one large star -- representing the Communist Party -- half surrounded by four smaller stars tilted to point toward the centre of the bigger one.

But the small stars on the Rio flags, including the one lifted by Chinese fencer Lei Sheng at the opening ceremony Friday, all point upwards.

The official design is intended to symbolises the four classes -- workers, farmers, urban petty bourgeoisie, and national bourgeoisie, as defined by Mao Zedong in a 1949 book -- supporting the Communist leadership.

China's consulate-general in Rio de Janeiro said in a social media posting Monday that it had made a formal complaint to the Brazilian organising committee.

The organisers apologised for the mistake and will contact the manufacturer to correct it, it added, denying reports that the flag maker was a Chinese firm.

But Chinese internet users were unmollified.

"As a 20-year old who's watched three Olympic games, this is really the worst one. They are the least dedicated and hold evident hostility" to China, said a poster on China's Twitter-like Weibo.

"The Olympics organised by Rio are horrible," said one. "The conditions are substandard and people are frightened by the gun fights."