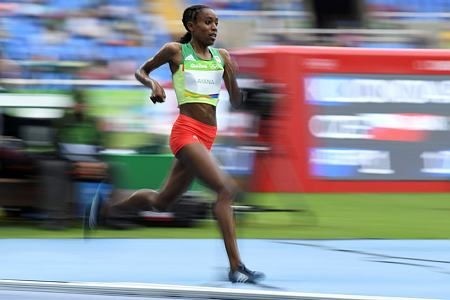 The 24-year-old smashed one of the longest-held records in athletics as she romped to victory in an electrifying start to the Rio Olympics track and field competition.

Ayana's winning time of 29min 17.45sec sliced nearly 14 seconds off the previous world best of 29:31.78 set by Wang Junxia in 1993 during the era of notorious Chinese coach Ma Junren.

The astounding display immediately raised eyebrows in the athletics world, with British women's marathon world record holder Paula Radcliffe one of the first to remark upon the Ethiopian's performance.

"I'm not sure I can understand that," Radcliffe said. "When I saw the world record set in 1993 I couldn't believe what I was seeing. And Ayana has absolutely blitzed that time."

Yet Ayana -- who had only raced the 10,000m once before heading into the Olympics -- smiled when asked to respond to suggestions that her performance might not be all that it seemed.

"I praise the lord, the lord gives me everything," she said through an interpreter.

"My doping is my training, my doping is Jesus -- otherwise I'm crystal clear."

Ayana said she had not planned to set a world record heading into the race.

Ayana's victory comes in a troubled year for Ethiopian distance running after the International Association of Athletics Federations in March placed the country in "critical care" with four other nations over failures in their anti-doping regimes.

Vivian Cheruiyot of Kenya took silver in a new national record of 29:32.53 while Dibaba won bronze in a personal best 29:42.56.

Dibaba had been bidding to become the first woman in history to win three consecutive golds in an individual athletics event.

But instead it was the 31-year-old's younger compatriot who stole the show with a magnificent performance.

Kenya's Alice Aprot had been the early front-runner, quickly leading a group of eight runners that broke away from a giant 37-strong field.

But with 12 laps to go Ayana hit the front, accelerating clear to stretch the leading pack.

Cheruiyot went with Ayana but was always struggling to stay in touch, and the closing laps quickly became a race against the clock and a question of whether Ayana could beat Wang's mark.

With the stadium roaring her home, Ayana scorched home with a 68sec final lap to claim gold.