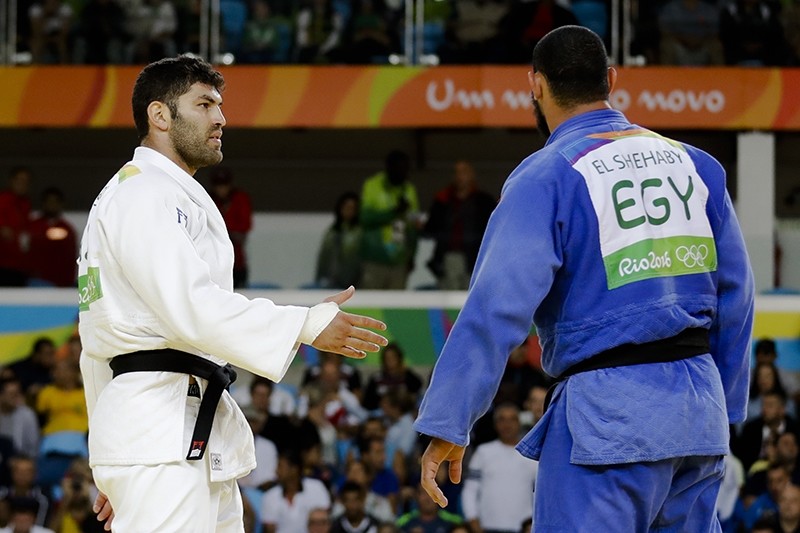 Egyptian judoka Islam El Shehaby has been sent home from the Rio Olympics after refusing to shake the hand of Israeli Or Sasson following the end of their bout, the International Olympic Committee said on Monday.

El Shehaby, who was sent home by his own team, lost the fight on Friday and was reprimanded by the IOC for his actions.

The IOC acknowledged that the rules of judo do not oblige players to shake hands but said El Shehaby's behavior went against the Games' "rules of fair play" and "spirit of friendship".

"The Egyptian Olympic Committee has also strongly condemned the actions of Mr Islam El Shehaby and has sent him home," the IOC said in a statement. "The President of the National Olympic Committee issued a statement saying they respected all athletes and all nations at the Olympic Games."

After Sasson defeated El Shehaby and the pair retook their places in front of the referee, the Egyptian backed away when Sasson bowed and approached him to shake hands.

When called back by the referee to bow, El Shehaby gave a quick nod before walking off amid loud boos from the crowd .

"The Disciplinary Commission (DC) considered that his behavior at the end of the competition was contrary to the rules of fair play and against the spirit of friendship embodied in the Olympic Values," the IOC said.

"The DC issued a 'severe reprimand for inappropriate behavior' to the athlete. It noted....the shaking of hands after a match is not in the competition rules of the International Judo Federation."

"As well as a severe reprimand, the DC has asked the Egyptian Olympic Committee to ensure in future that all their athletes receive proper education on the Olympic Values before coming to the Olympic Games," the IOC said.

El Shehaby, 32, had reportedly been pressured by fans on social media not to show up for the match with his Israeli opponent, who went on to win bronze in the +100kg category, because it would shame Islam.

"Shaking the hand of your opponent is not an obligation written in the judo rules. It happens between friends and he's not my friend," El Shehaby said after the bout.

"I have no problem with Jewish people or any other religion or different beliefs. But for personal reasons, you can't ask me to shake the hand of anyone from this State, especially in front of the whole world," he said.

Similar scuffles have happened before between Israeli and Arab judo athletes. At the quarter-finals of the 2011 judo Grand Slam in Moscow, Egyptian Ramadan Darwish refused to shake hands with Israeli Arik Zeevi. The next year, Darwish again declined to shake hands with Zeevi after beating the Israeli in their quarterfinal match at a tournament in Dusseldorf.

On Thursday, Moutaz Matar, a TV host of the Islamist-leaning network Al-Sharq, had urged El Shehaby to withdraw.

"My son, watch out. Don't be fooled, or fool yourself, thinking you will play with the Israeli athlete to defeat him and make Egypt happy," he said. "Egypt will cry; Egypt will be sad and you will be seen as a traitor and a normalizer in the eyes of your people."

Egyptians clearly were divided before the match over whether El Shehaby should compete or withdraw, and there was a mixed reaction on social media afterward. Many blamed him for embarrassing the country, although some felt sympathy for El Shehaby, saying he was put under a lot of pressure.

Egypt was the first Arab power to make peace with Israel, in 1979, but the treaty remains unpopular among many Egyptians.