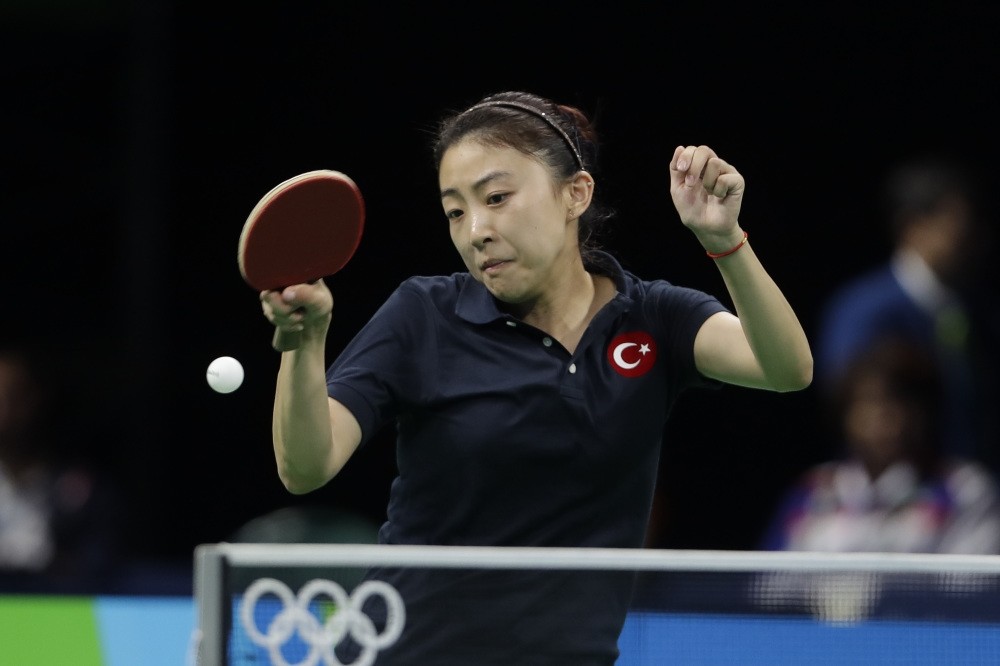 Chinese-born Turkish player Melek Hu plays against Chen Szu-Yu of Taiwan during their table tennis match at the 2016 Summer Olympics in Rio de Janeiro.
by Associated Press Aug 17, 2016 12:00 am

Transfer of allegiance is on the agenda for Saturday's council meeting, the International Association of Athletics Federations (IAAF) revealed to The Associated Press. Sebastian Coe's IAAF leadership has discussed the issue during the Rio de Janeiro Olympics. On the eve of the Olympics, the IAAF allowed 85 athletes to compete for new countries, including 12 now on the Bahrain team after previously representing African or Caribbean nations.

"There are so many athletes in Kenya," the 19-year-old Jebet said, explaining her decision. "In Bahrain I get the chance to go to school."

Andrew Fisher competed in the 100 meters for Bahrain after being among those athletes to have their transfer of allegiance confirmed in July. The 24-year-old former Jamaican has said he would remain living on the Caribbean Island and had only visited Bahrain once. Fisher hasn't masked the fact that he went in search of a new nation to secure a place at the Olympics because he felt he could not qualify for the Jamaican team, which is headed by Usain Bolt.

"It was a decision that took months to come to," Fisher told the Jamaica Observer newspaper recently. "I love Jamaica and didn't think I could live anywhere else.

"The Jamaican team right now is a hard one to make, and we all have ambitions to compete at the highest level, and this was one way I saw where I could fulfil that ambition."

Neither Fisher nor Jebet had previously appeared in an Olympics. If they had, IOC rules would allow them to represent their nations at the Olympics if they had been competing under their new flag for three years. The IAAF has similar eligibility rules for its international competitions but with flexibility to hasten nationality changes. In football, players cannot switch countries once they have played in a competitive senior international game.

The IAAF Council is set to explore whether it is right to allow athletes to find a new nation to represent if they feel the depth of talent in their original country is considered too strong to qualify for competitions. The IAAF could demand a greater show of commitment to the athlete's new country, with exceptions for refugees or people who move due to relationships.

The move by the IAAF to look at new rules comes at a time when nationality switches are prompting extra attention - and sometimes ridicule - from fans.

The Qatari men's handball team for Rio is almost entirely made up of European-born players attracted by the financial rewards gas-rich Qatar offers in a relatively cash-strapped sport.

Some are in the bizarre position of competing against their original homelands, including Bertrand Roine, who won the world championship with France in 2011 but competed against France for Qatar last week.

"The worst feeling was during the national anthem. Ah, but what can I do?" Croatia-born Marko Bagaric said after Qatar's game against his former countrymen. "Qatar gave me the opportunity to play in the Olympic Games. It is the dream of any sportsman."

Chinese-born players dominate table tennis worldwide and competed in Rio not just for China, but at least a dozen more countries including Turkey, Canada and Germany. The 53-year-old Li Xianlian was a world champion for China in 1983 but was still competing in Rio this month, her third Olympic appearance for Luxembourg.
RELATED TOPICS