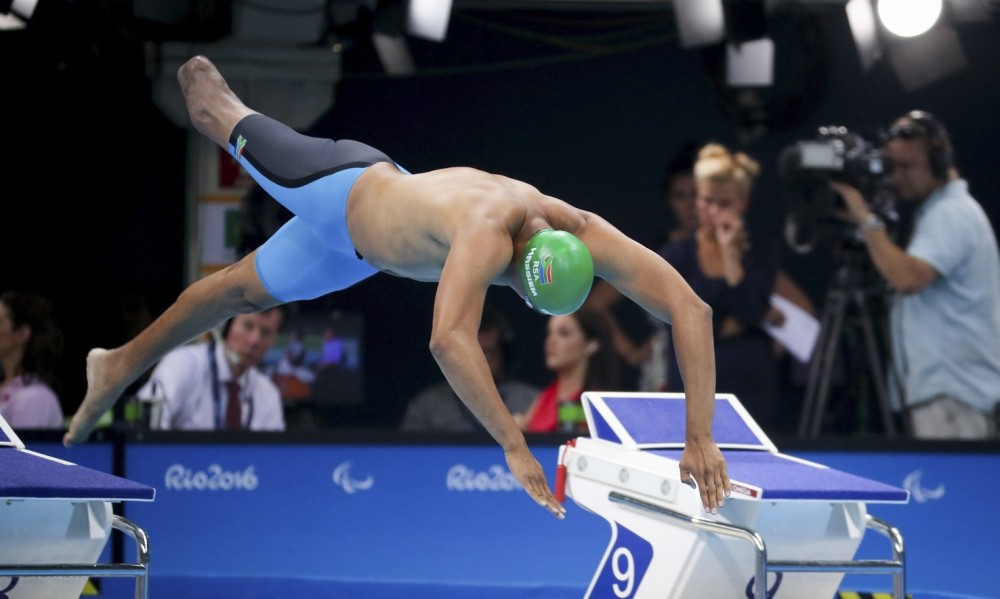 by Sep 15, 2016 12:00 am
When South African Achmat Hassiem competes in the Paralympic swimming pool he motivates himself by imagining a shark just behind - the shark that bit off half his leg a decade ago.

The fates of Hassiem and sharks have been inextricably wrapped up since that day off Cape Town when a great white caught him during a lifeguard training drill.

Then the shark almost killed him. Today the injury has propelled him into the Rio Paralympics.

And next week, having completed his third and final Games, he will start a new career: globe-trotting advocate for saving sharks from overfishing.

"My nickname is 'shark boy.' Everyone calls me 'sharky' or 'shark boy,'" he told AFP on Tuesday after competing in the 100m freestyle.

When Hassiem, 34, removes his prosthesis, which is emblazoned with the South African colors, and gets into the pale-blue pool, he thinks back to the moment when he took what was almost the last swim of his life.

"I actually use that fear when I race," he said. "I imagine a 4.7 meter (15.4 foot) great white shark guiding me down the lane and pushing me to try and get out on top."

It was Aug. 13, 2006, and then 24-year-old Hassiem and his younger brother Tariq were playing the role of victims in a lifeguard exercise off Muizenberg beach.

While waiting to be picked up by a rescue boat, Hassiem noticed a grey triangle approach his brother.

"I thought it was a dolphin, either a dolphin or one of those seals," he said. "I decided to look under the water."

When he resurfaced, he "screamed." His brother was in the path of a huge shark.

Fearing the boat would not arrive in time, Hassiem began to beat on the water to draw the threat away from Tariq. The plan worked: it saved his brother.

Hassiem, though, was going to have to fight for his life.

"In just a matter of seconds I was face-to-face with a shark," he said. Struggling to keep away from the mouth, he even tried to mount on its back, only to find that "my right leg didn't want to come forward."

"That's when I saw that half my leg was in the shark's mouth already."

The shark dragged Hassiem underwater for about 50 meters (164 feet), which, as he noted, looking into the Rio arena, "is the same length as that Olympic pool."

Only when the shark finally severed his leg could he return to the surface, half drowned, and be pulled out.

Hassiem recovered, but his right leg was gone and so, too, his dreams of moving from a semi-professional football career to full-time.

It was multi-medal winning South African Paralympic and Olympic swimmer Natalie Du Toit who encouraged him to try the pool. He never looked back.

"I took to the pool like a shark to the ocean," he joked.

Hassiem competed in the Beijing 2008 Paralympics, won bronze in London 2012, and Rio will be his last.

Last year he was named a Global Shark Guardian by the United Nations. "What that entails is that I work to protect sharks all over the world, sort of like an advocate or ambassador for sharks," the tall, amiable athlete said.

Far from harboring hatred or anger at the animal that almost took his life, he feels a sense of duty to stop the overfishing that is destroying shark populations and threatening to disrupt the ocean food chain.

"The statistics are terrible. A hundred million sharks approximately are killed a year and, you know, more humans are killed by toasters than they are by sharks," he said.

Looking back on his remarkable turn of fortune since that terrifying encounter, he says: "I need to give back to the sharks for what they have given to me."
RELATED TOPICS