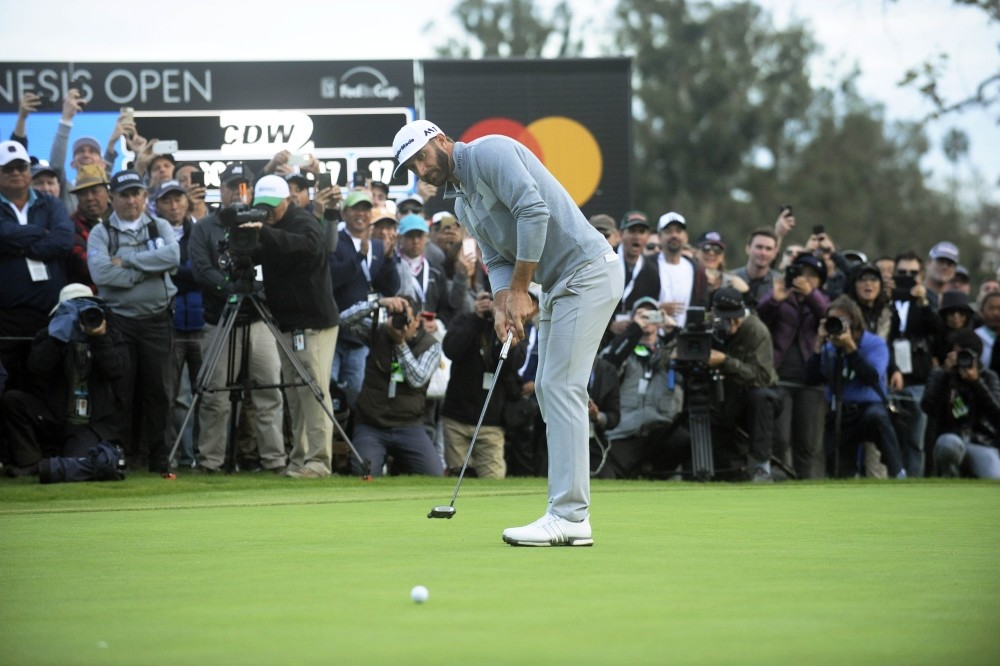 Dustin Johnson puts on the 18th hole green during the final round of the Genesis Open golf tournament at the Riviera Country Club.
by Associated Press Feb 23, 2017 12:00 am

Golf hasn't had a truly dominant player for more than a year since Tiger Woods. Finding one now will take time

Imagine the best players in golf competing at the absolute top of their games.

Who's the toughest to beat? World ranking computations aside, who's the real No. 1?

That question was a lot easier 10 years ago.

The evidence was the record that Tiger Woods compiled, whether it was his 79 victories in 17 full years on the PGA Tour, the 10 tournaments he won by at least eight shots or the two times he spent more than five straight years at No. 1.

The answer is a lot more difficult now, and it could take years to sort out.

Jason Day has not won since May and still held the No. 1 ranking for 47 consecutive weeks. In this culture of short attention spans, it's easy to forget that he won seven times in 17 tournaments and at times looked unbeatable doing it. The new No. 1 is Dustin Johnson, whose five-shot victory at Riviera was his fourth since June, all against the strongest fields.

But just a week earlier, warning shots were sounded that this could be a big year for Jordan Spieth. The way he struck the ball at Pebble Beach, the way he always putts, perhaps he would be headed for another year like 2015 when he won two majors and had a chance to win them all.

The week before that, Hideki Matsuyama won for the fifth time worldwide in his last nine starts. Still to be considered are British Open champion Henrik Stenson and four-time major champion Rory McIlroy, neither of whom has played as much this early in the year.

Padraig Harrington contemplated the question when he finished up at Riviera. He believes the answer lies between the ears. He also believes that's difficult for any of those six players -and the list only figures to get longer -because they're too busy looking around at everyone else.

"When you have one player who knows his 'A' game is better than anyone else's, he's able to play within himself and win," Harrington said. "Whereas when you have half a dozen guys capable of playing like that, it makes them all look over their shoulder. ... All of a sudden you're turning up thinking, 'I've got to play great to win this week.' Maybe Dustin -at this stage -could be thinking, 'I've just got to turn up and play and I'm a winner.' That's a lovely place to be. And that's where Tiger was.

"Tiger knew his 'B' game was good enough, and that made him play even better," he said. "The place you want to be is believing your game is a winning game. It's hard to believe that now. If Jason Day turns up, if Jordan Spieth turns up, Dustin, Rory, Henrik. If any of these guys turn up and hit form, they all look unbeatable."

Johnson's power is such that he was the only player to average more than 300 yards off the tee at Riviera in the cool Pacific air and soggy turf. He knew where it was going, too, which is always a good combination. He didn't putt his best, but he didn't need to.

It was a lot like Day during that amazing run he had, particularly at Whistling Straits in 2015 when he won the PGA Championship. It wasn't much different from watching McIlroy in full balance with his swing, like at Royal Liverpool when he went wire-to-wire to capture the 2014 British Open. Spieth is not as long off the tee and occasionally will get left out of these conversations, which is a mistake.

It's not an issue this week. The top six players in the world -all of them can reach No. 1 by the end of the month -are not playing the Honda Classic. All of them will be in Mexico City next week for the first World Golf Championships event.

And there are still four majors, which will go a long way toward some separation.

At least this year.