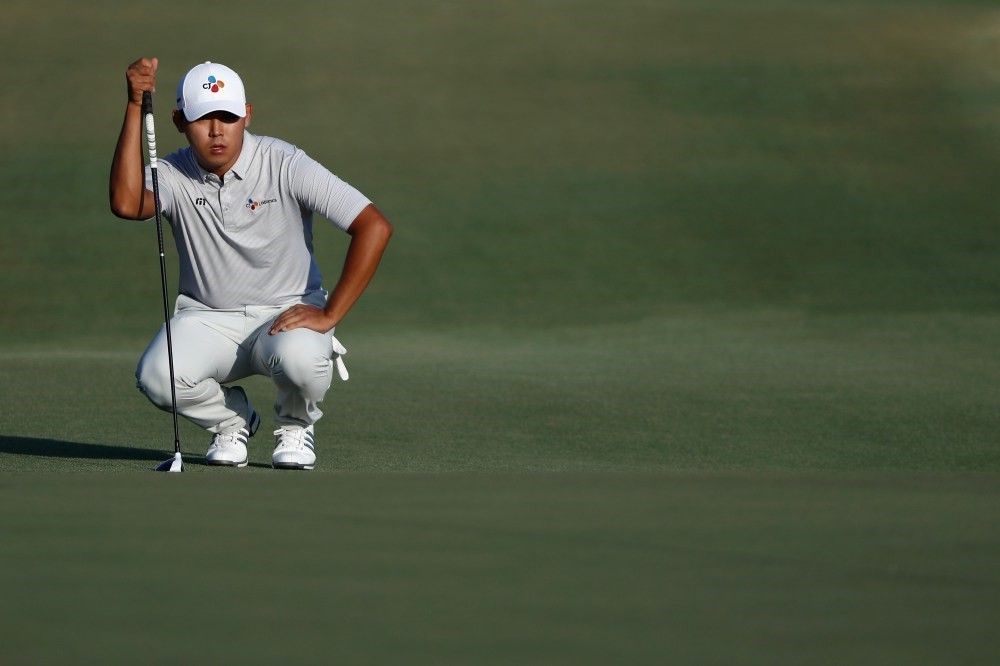 The 21-year-old displayed composure beyond his years to finish on 10-under 278 and follow 2011 champion K.J. Choi as the second South Korean to win the PGA Tour's flagship event. Englishman Ian Poulter (71) was the only player to put pressure on Kim over the final few holes. However, he bogeyed the last after shanking his second into a bush and finished tied for second with South African Louis Oosthuizen on seven-under.

World number one Dustin Johnson carded a final round 68 to finish tied for 12th while number two Rory McIlroy ended with a 75 to drop to equal 35th.

Kim, nearly two years younger than Adam Scott when the Australian won in 2004, is also the first player from Asia to win twice on the PGA Tour before the age of 22."Today was a very happy day. I didn't expect that I could be the champion of this tournament at this young age," Kim told a news conference.

Kim caught the eye when he clinched his first PGA Tour victory in Greensboro, North Carolina last August but had endured a wretched 2017 campaign until this week, his cause not helped by back and wrist injuries.

Acting on advice from his new instructor Sean Foley, who coaches Olympic champion Justin Rose and previously worked with Tiger Woods, Kim has started using more hip-turn in his backswing and everything came together in Florida as he blew away arguably the deepest field of the year to win the event.

Kim also thanked compatriot Choi for helping him close out the victory.

"He taught me about the course and so when I was in position the last round, his experience of being in the leading position, that kind of advice actually helped me a lot," Kim said.

On a course that muzzles the long hitters and makes them think twice about taking the cover off the driver, most of the big names were nowhere to be seen on the leaderboard.

Defending champion Jason Day had a quadruple-bogey nine at the par-five 16th and a double-bogey at the par three 17th to shoot 80 and plunge to equal 60th.

Masters champion Sergio Garcia, who started the day three shots from the lead, did not fare much better with a 78 and finished tied for 30th place.